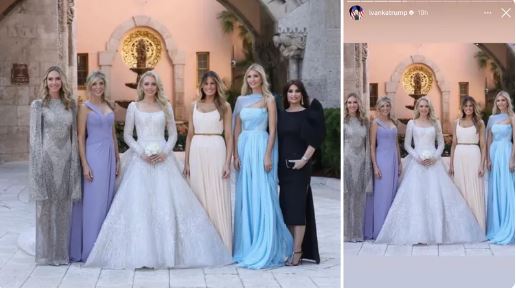 Ivanka Trump definitely had a theme for her half-sister Tiffany Trump’s wedding this weekend: crops.

Ivanka, Tiffany’s matron of honor, kicked things off by wearing a glitzy Miu Miu pink crop top and skirt set to the Friday rehearsal dinner. We’re not talking a flash of torso: She’s showing at least four inches of abs, which, at your sister’s wedding, is quite a power move and, I’d argue, an invitation for violence.

If my sister wore this to my rehearsal dinner I’d murder her on the spot pic.twitter.com/eqShJOXPVV

On Sunday, when Ivanka began posting shots from Tiff’s big day, she cropped Don Jr’s fiancée, former Fox News host Kimberly Guilfoyle, out of a photo she shared both on in her main grid post and on Instagram stories. The original photo shows Lara Trump (Eric’s wife), Tiffany’s mom Marla Maples, the bride, Melania Trump, Ivanka, then on the far right (heh), Guilfoyle dressed in all black with giant puffy sleeves and heavy black eye makeup.

RELATED:  Alexandria Ocasio-Cortez fires back at Ivanka Trump: I ‘worked for tips’

In Ivanka’s defense, Guilfoyle’s dark look really doesn’t go with the Trump women’s pastel vibe, a photo of five people plus the bride at the center is awkwardly asymmetrical, and Guilfoyle defiantly hasn’t gone blonde—or even lightened her hair at all!

But someone must have pointed out the optics of cropping the photo to Ivanka, who shared the original photo on her stories four hours later—and only after posting four more wedding photos and two stories about going golfing with “Dad” (vomit). Then she finally posted the full, uncropped version, accompanied by a trio of “smiling face with three hearts” emojis, lest you think there’s any bad blood between Ivanka and Kim. 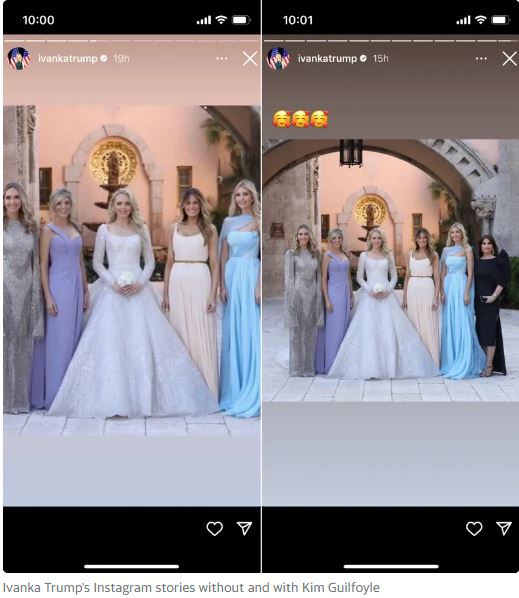 Ivanka Trump’s Instagram stories without and with Kimberly Guilfoyle

At any rate, I hope the wedding attendees enjoyed learning—during the reception no less—that Democrats have officially retained control of the Senate! I know I did.