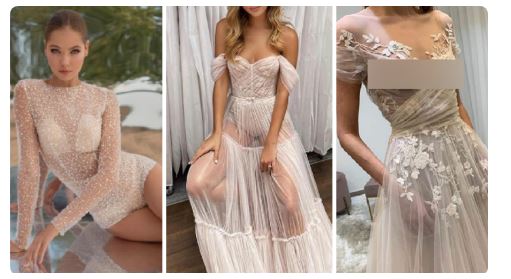 The most risqué, eye-popping wedding dresses of 2020

2020 was a year that will go down in history for so many reasons that you could be forgiven for forgetting that between plague, floods and bushfires, this year was also an extreme one for the world of bridal fashion.

As we masked up to slow the spread of COVID-19, brides were boldly shedding tradition when it came to their choices of gowns, with the dresses sashaying down the socially distanced aisle more eye-popping, head-turning and revealing than ever before.

From the trot of the naked wedding dress that emerged a few years back, 2020 saw us break into a full gallop of envelope-pushing trends with very few rules, and very little fabric, dominating the scene.

From the totally see-through to the return of the bodysuit, one very busty bridesmaid number and a ‘diaper’ detail, here are our favourite daring bridal looks from the year that’s been. 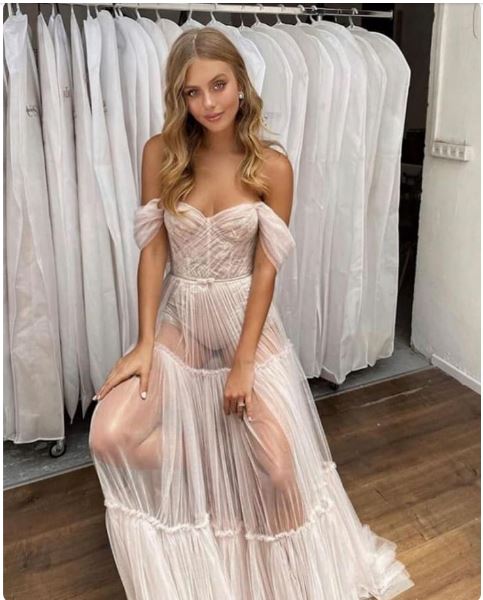 The naked wedding dress game got turned up a notch this year with some truly ‘out there’ gowns. 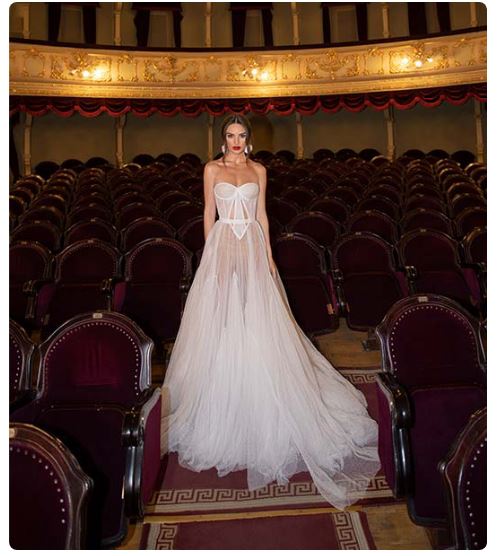 From the totally sheer Berta bridal number that had pearls rattling across the globe, to the almost indecent exposure below the bodice on this ‘Marilyn’ gown from Dimitrius Dalia, less was certainly more when it came to skirts this year.

RELATED:  6 Style Bloggers Will Show You What to Wear to Your Next Wedding 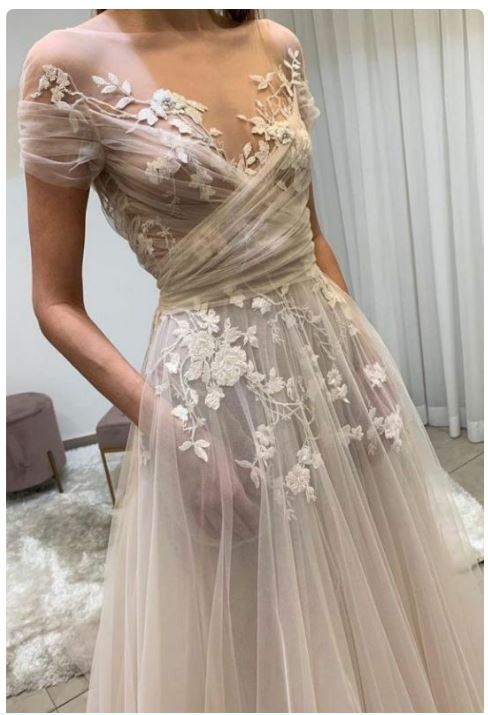 One look that left onlookers’ shocked was this floaty, designer gown that went viral on Facebook.

The gown, though romantic in cut, was more earthy in effect thanks to zero lining to preserve the bride’s modesty.

The effect was that very little of the lady was actually covered for her big day, with even the pockets counterproductively completely sheer, erasing any usefulness they may have entiled.

Love it or hate it, it’s easy to see why this gown made waves among wedding watchers this year. 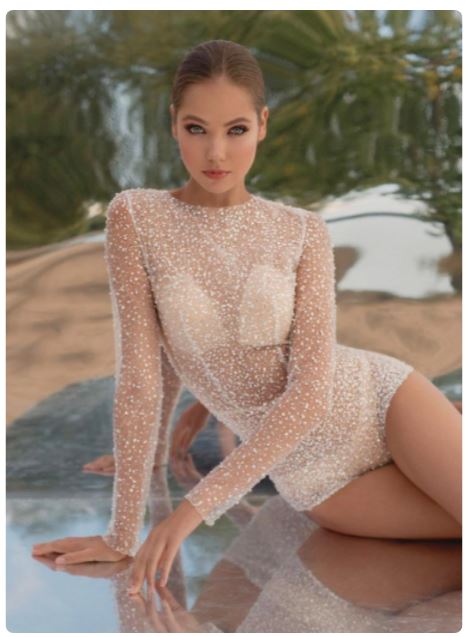 Nothing says modern-day wedding like a bridal bodysuit, and where 2019 brides opted for full coverage on the suit itself, 2020 brides ditched the covering material for something far more daring.

The suit that sparked the most serious conversation this year was a completely sheer number from an online fashion designer, featuring a sparkling bodysuit underneath a gauzy transparent skirt with a waist-high split.

The long-sleeved high-neck bodice is completely sheer with only what looks like a stick-on bra keeping the bride’s modesty intact, and a backless design rounds off the dress’s intricately barely-there aesthetic.

Retailing for a relatively cheap $1,300 on etsy.com, the gown actually transforms into a bodysuit when the skirt is removed, a versatile feature rarely seen in the world of bridal dresses, with one notable exception. 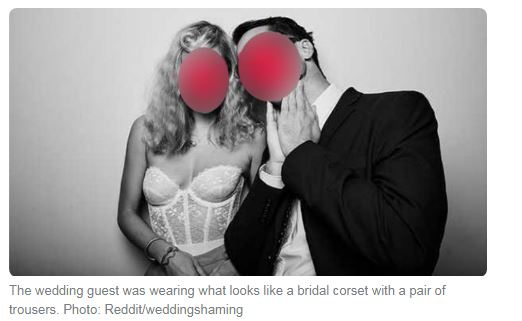 It’s usually the bride that’s the centre of attention on her big day, and rightly so, but this year it was a few wedding guests that set tongues wagging with their boudoir-style attire.

From the strapless corset sported by one guest to this red lace number that had many raising their eyebrows, the naked dress trend officially spilled from aisle to pew this year. 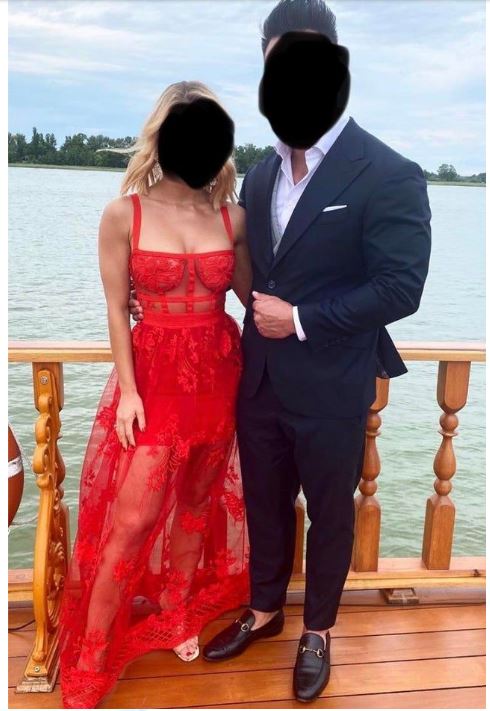 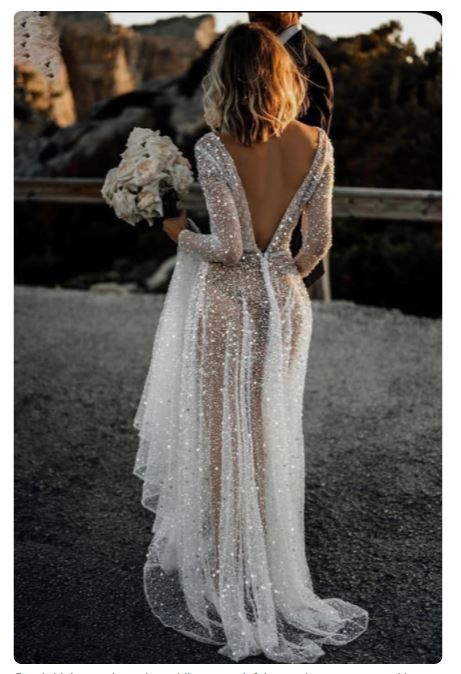 A snap of a bride sporting a completely transparent wedding gown with a shimmering skirt that revealed the black g-string worn beneath was the most recent wedding dress that caused consternation online this year.

“A sheer dress is one thing, but a sheer dress with a black thong???” the person who posted a snap of the dress to a Facebook wedding shaming group wrote in disbelief.

As far as the bridal trends that shocked us this year, this one may nab first place for most confusing. 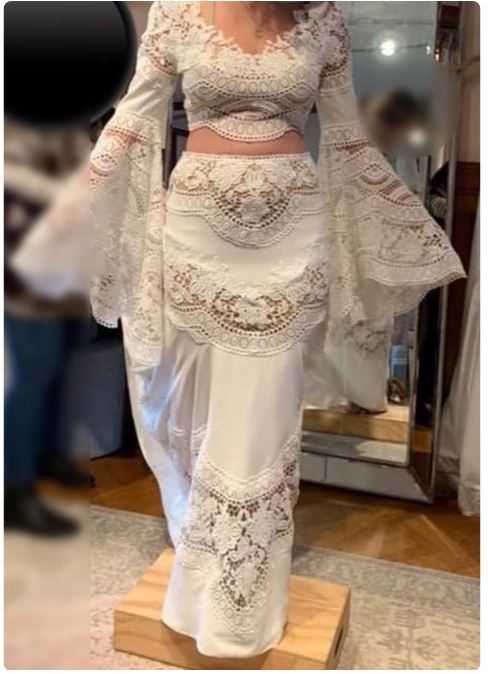 This bohemian number took the cake for most awkward detail, as the bride took the term ‘crotchet’ a little too literally, accidentally exposing herself via the delicate detailing.

Nude gowns and plunging neckline may push the envelope, but a dangerous crotch area undeniably tears it to pieces, as we all learnt after the unfortunate detail was spotted and discussed online.

The dress was shared to a wedding shaming Facebook page, where the ‘peekaboo’ crotch unsurprisingly sparked some hilarious, if unfortunate, comments.

“That waistband/crotch doily looks real bad. You can see her nude underwear!” one person pointed out. “It’s so unflattering!” 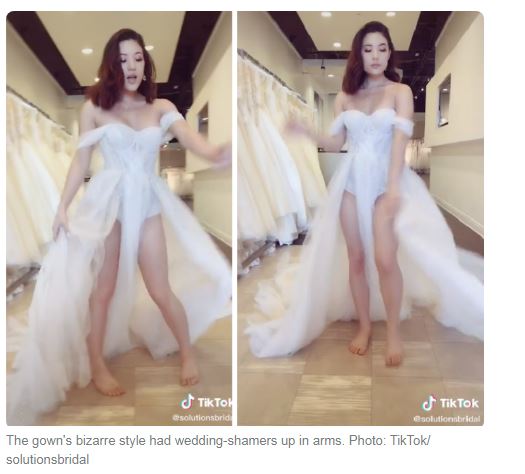 Brought to you by Tiktok, this unusual cut of dress was spotted in a video shared by bridal store Solutions Bridal based in Florida in the US.

In the clip, a model sporting the gown acts out a hilarious dance to ‘A Little Bit Alexis’ – a comedy song from acclaimed series Schitt’s Creek, but it was the bizarre cut of the dress rather than the funny dance, that caught viewers’ attention.

The gown splits over each leg, with a long piece left dangling in between, a style that’s since been affectionately dubbed the ‘crotch waterfall’.

As she walks the extra piece disappears between her legs creating a ‘diaper’ around her crotch that detracts from the elegance most bride’s hope to achieve on their wedding days. 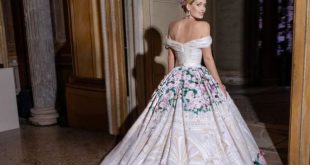 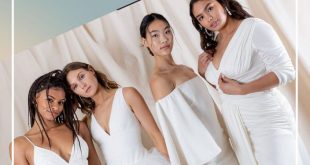 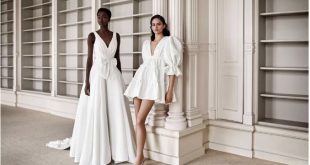 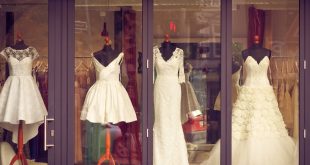 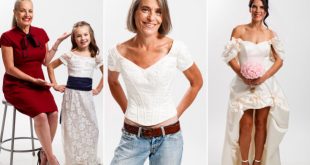 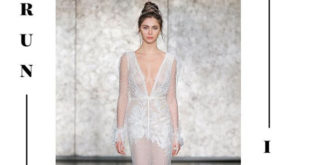 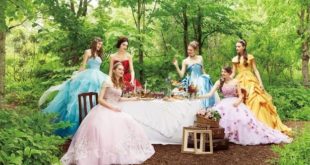 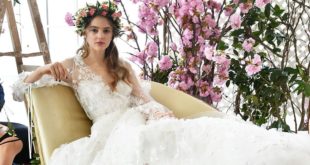