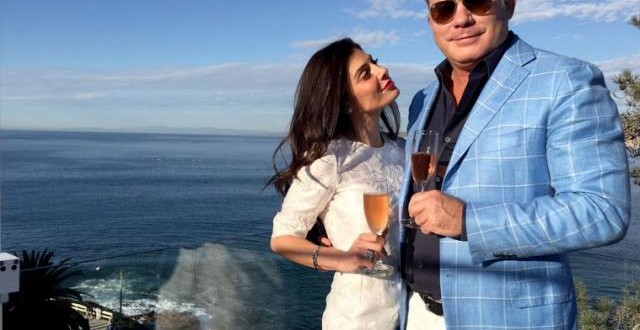 Who needs a rose when you’ve got a whole bouquet?

Selma Alameri, who competed on Sean Lowe’s season of The Bachelor, has found her happily ever after with Patrick Daniels, whom she married in a low-key city hall ceremony on Thursday.

“Getting married!” she captioned a photo of herself in a knee-length white dress, black heels and a bouquet of red and white flowers. The bride wore her hair loose and kept her makeup simple with a pop of red lipstick.

In another photo that shows her getting a kiss on the cheek from her new husband, Alameri wrote, “It’s official!!! Mr. and Mrs. Daniels!!” adding the hashtag #cityhallstyle.

Her final post of the big day showed her looking adoringly at her husband as they held champagne flutes overlooking a beautiful view of the ocean.

“I get to love him forever and ever!” Alameri gushed. “Sorry guys- last one I promise!”

Alameri shared the engagement news in June by showing off her stunning diamond ring on Instagram.

“He promised me forever!!” she captioned the photo, adding the hashtags #mybestfriend and #MrsDaniels.

Alameri made waves during her stint on The Bachelor by refusing to kiss Lowe due to her strict Muslim upbringing.

“I don’t believe showing affection in public is a bad thing, but my mom does,” the reality star told PEOPLE after getting booted off the show. “Her one simple request was don’t make out with somebody on television. We have such a strong culture and my family is big in my life, so I needed to test Sean to see if he’d respect my family and culture.”

“Honestly, I never regret anything,” she said. “ afraid that he’d take that as I don’t really like him. But Sean is such an amazing man that he totally understood.”