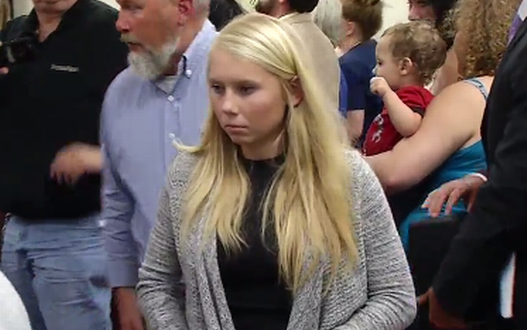 An 18-year-old cheerleader has been arrested after her child’s remains were found buried in her backyard, with investigators revealing the baby was alive at the time of birth.

Brooke Skylar Richardson was charged with reckless homicide in the US state of Ohio on Friday after evidence emerged that the child “was not a stillborn baby”, according to the Dayton Daily News.

Authorities determined the infant died more than two months ago and only found the child’s remains because of a tip from a doctor’s office.

Warren County prosecutor David Fornshell said the charge was based on evidence that “the baby whose remains were discovered at the defendant’s residence in Carlisle a week ago was born alive and was not a stillborn baby”.

He continued: “Law enforcement is continuing to treat this as an active and ongoing investigation.”

Warren County Sheriff’s Deputy Brandi Carter wrote in the complaint that on or around 7 May 2017 Richardson “did recklessly cause the death of another, or the unlawful termination of another’s pregnancy.”

Ms Richardson’s attorney, who had already entered a not guilty plea on her behalf before Friday’s court appearance, said the defendant was a good student who had just graduated from high school a few months ago and was planning to go to college at the University of Cincinnati in the autumn.

“She didn’t drink. She wasn’t a partier or a smoker. By all measures a very good girl who helped children. She’s by all means a very good person,” he told the court.

The attorney added that she had helped kids with disabilities at a cheer camp and worked at the YMCA with children.

Officials are still waiting for the final report from the coroner regarding the death of the baby.

Ms Richardson was booked into the Warren County Jail, where she was released on $15,000 bond. If convicted, she faces one to five years in prison.