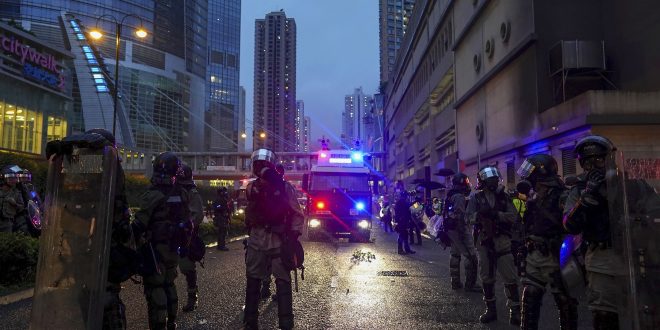 Hong Kong police used tear gas, drew their guns and deployed water cannon trucks this past weekend after some anti-government protesters attacked officers with sticks and rods. The clashes escalated the Chinese city’s summer of protests, which shows no sign of subsiding. A look at the latest developments and what’s to come:

Hardliners confronted police anew after largely holding back the previous weekend. They occupied streets on Saturday and Sunday, erecting barriers across roads after otherwise peaceful marches by thousands of others. Wearing gas masks, they threw bricks and gasoline bombs toward the police, as the latter fired tear gas canisters at them. The return to confrontation signaled their belief that the government won’t respond to peaceful protest alone.

The police deployed two water cannon trucks Sunday for the first time during the 11 weeks of protests. In what may have been more of a test run, a cannon was fired at least once as police advanced. The water didn’t seem to reach the protesters, who were already beating a hasty retreat. Public broadcaster RTHK reported that the police earlier fired at heavy barriers abandoned by protesters. The cannons failed to break apart the barriers, and officers dismantled them by hand.


RELATED:  Hong Kong May Be the Battleground for a New Cyber Cold War

Some protesters who remained in the area after the main confrontation later charged at a group of officers, who used shields to defend themselves against the protesters’ metal and wooden rods. Six officers pulled out their pistols and one fired a warning shot toward the sky. Police said they had no choice after being surrounded by protesters, but some residents questioned whether their action was necessary.

A major march is planned for Saturday, the fifth anniversary of a Chinese government decision against allowing fully democratic elections in Hong Kong. The Beijing government said citizens could vote for their leader, but the candidates would have to be approved by a nominating committee. The decision sparked the 79-day long student-led occupation of major streets in what became known as the Umbrella Revolution. Those 2014 protests failed to win major concessions from the government, an outcome that fuels the current protesters.