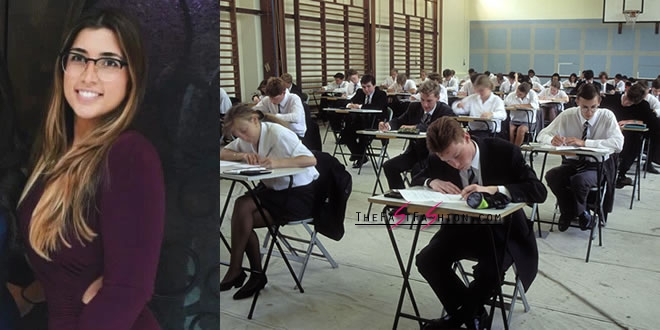 A Bronx teacher cracked open last year’s state Regents history exam the morning of the test and secretly relayed questions to an honors student who hustled to plaster the info on Facebook, investigators found.

Palma was slated to later score the test but was pulled from duty after state education officials were alerted to a Facebook posting that revealed testing topics the morning of the exam.

A pair of unsettled students told another test proctor about the suspect posting before they took the exam, according to the SCI report.

“They asked the teacher if it was possible for a student to know the questions ahead of time,” the report said.

The instructor initially dismissed the information as bogus — but later noticed that the Facebook post was on the mark.

When the posting student arrived to take the test, administrators confronted her about the apparent leak.

She initially said she was given the questions by her brother before switching her tale and claiming she overheard them from students on a school bus, according to the SCI report.

“Student A added that she posted the essay questions on her Facebook page because she thought it would be helpful to other students,” the report states.

But her brother eventually outed Palma, telling probers that the teacher had contacted his sister by phone to pass along the coveted information that morning.

The cornered student continued to deny that Palma had given her the questions and said she never had any contact with her teacher by phone.

But a review of a cell phone number associated with Palma revealed that she had two calls with the student the morning before the test.

The SCI report said investigators were unable to contact Palma but that she resigned soon after the incident and no longer works with the Department of Education.

The SCI concluded that she provided the student with the questions and recommended that she no longer for work with the DOE.

“Ensuring academic integrity at our schools is critical, and this incident was reported and investigated,” said DOE spokesman Michael Aciman.

He said Palma is ineligible for future employment with the department because of the incident.