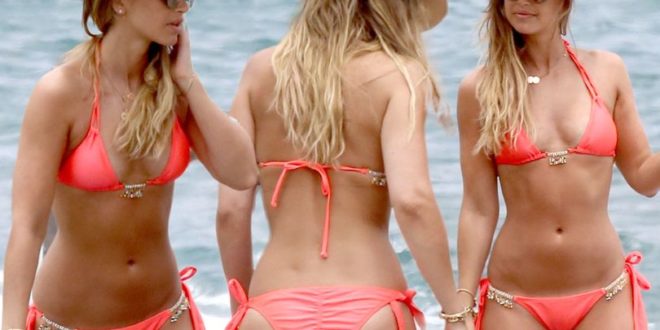 Vogue Williams might be pining after her boyfriend Spencer Matthews but she’s determined not to let her heartache get in the way of making the most of the sun, sea and sand in Marbella.

The 31-year-old model stepped out in a fluorescent orange bikini as she took to the beach today.

Determined to work on her tan, the bronzed beauty went on the hunt for a sun lounger – flaunting her peachy bum in the process. 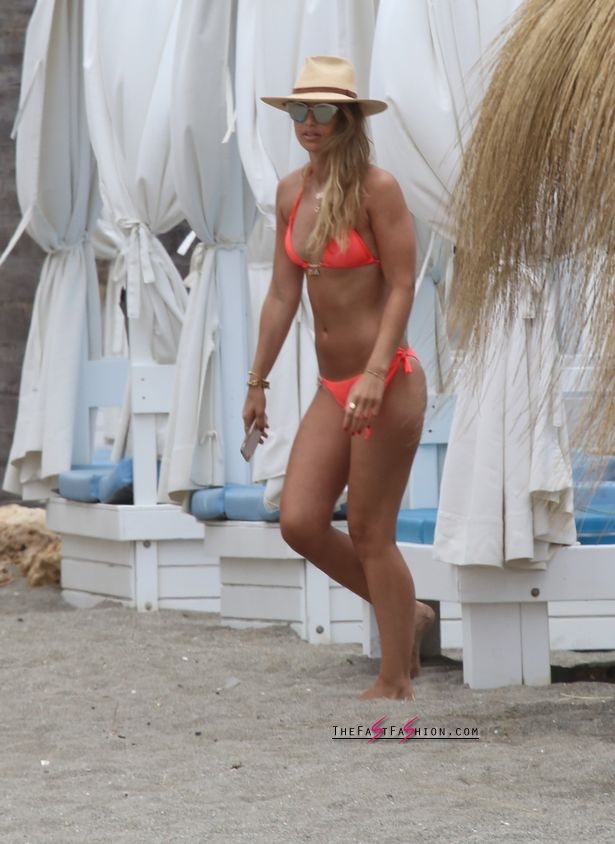 Vogue is in Marbella with her sister (Photo: Flynet) 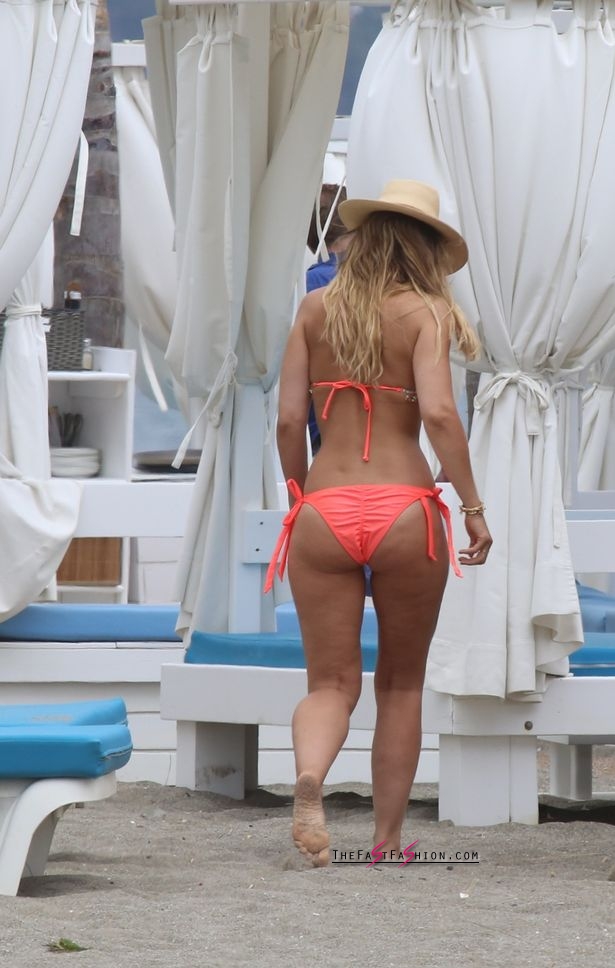 She showed off her peachy bum (Photo: Flynet) 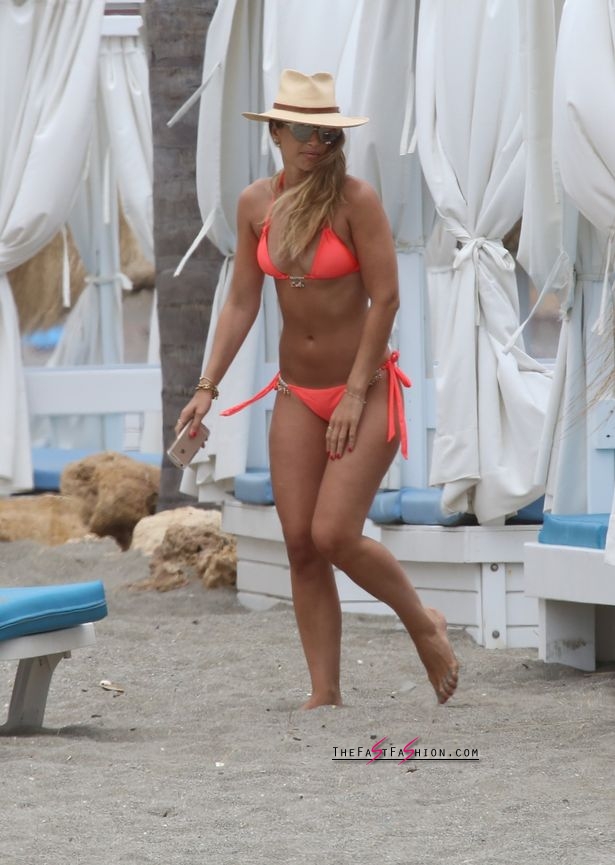 She checked her phone (Photo: Flynet) 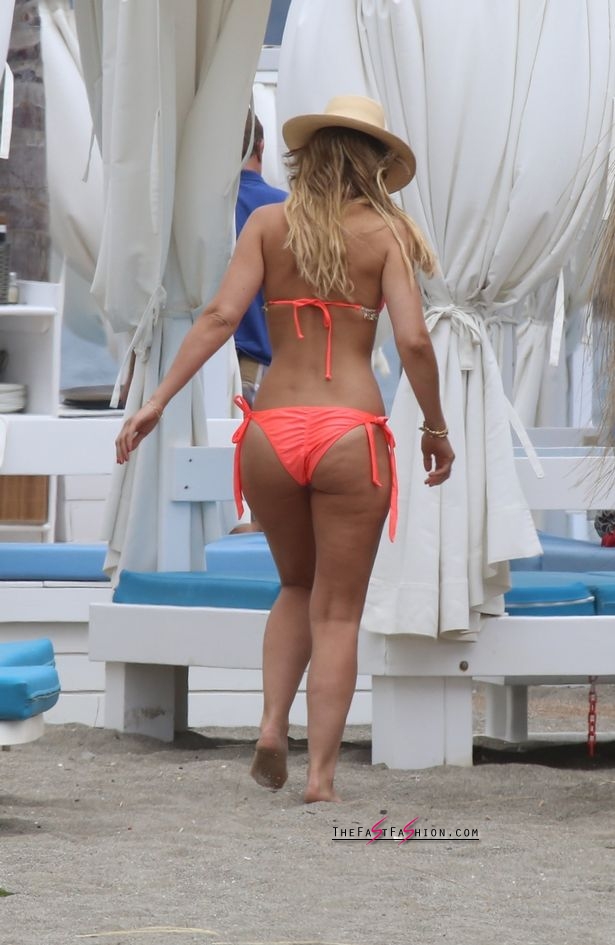 She paired the eye-catching two-piece with a pair of mirrored sunglasses and a straw hat.

Wearing her long blonde hair in loose mermaid waves, she looked perfectly at home on the beach.

Earlier today, as she continues to holiday abroad without her beau, she insisted their separation does NOT mean trouble in paradise. 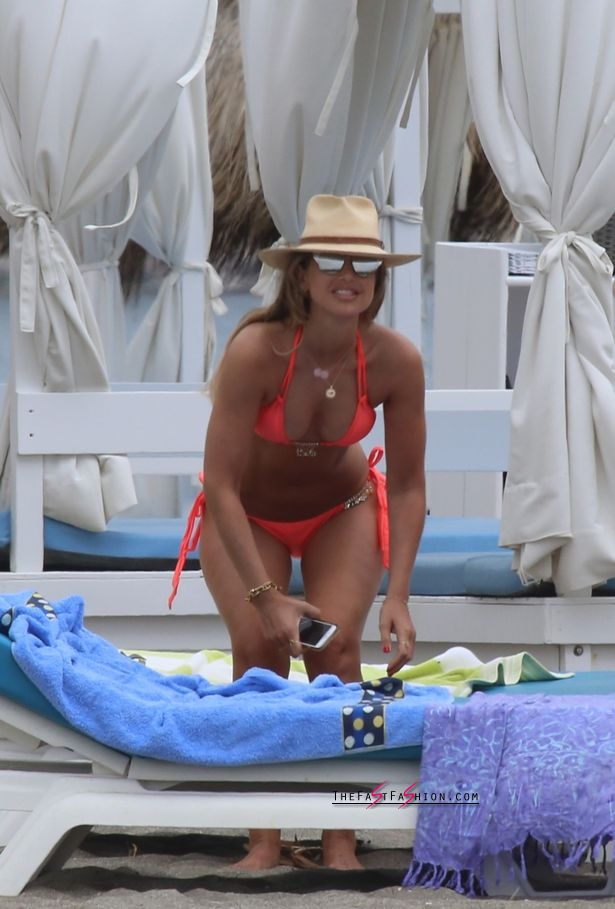 She was determined to sunbathe (Photo: Flynet) 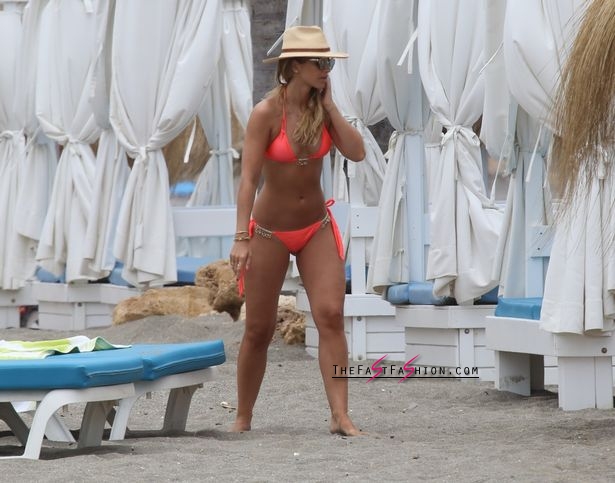 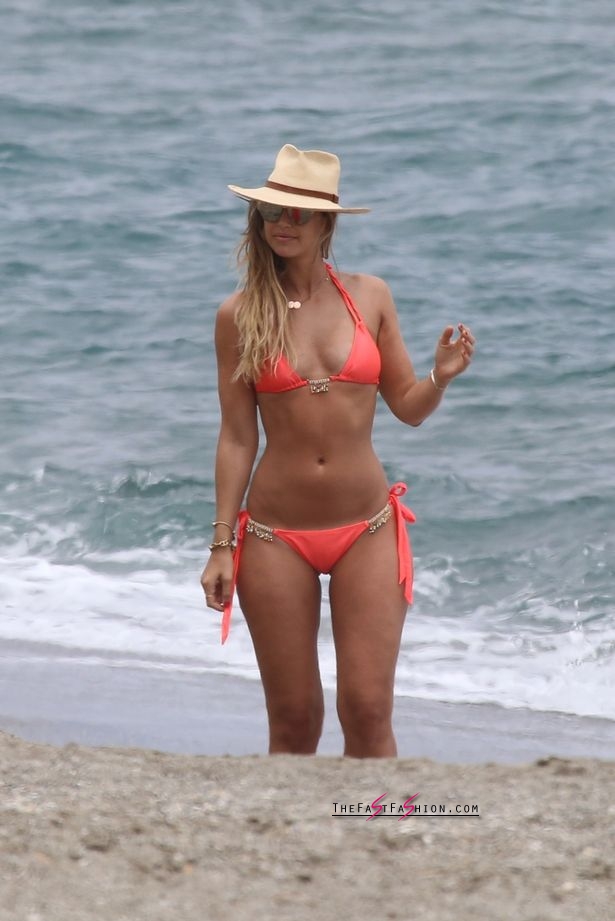 The Irish model, who wasn’t with Spencer at Pippa Middleton ‘s wedding last week, laughed off the suggestion of cracks in their romance after it was pointed out Spencer didn’t reply to her gushing tweet on Tuesday morning about missing him.

Vogue, 31, had tweeted a cute selfie of her and Spencer, 27, alongside the message: “As much as I love being on holidays I miss the one A LOT. Can’t wait to see you Spencer Matthews .”

But when Spencer didn’t reply immediately, of course it raised eyebrows… 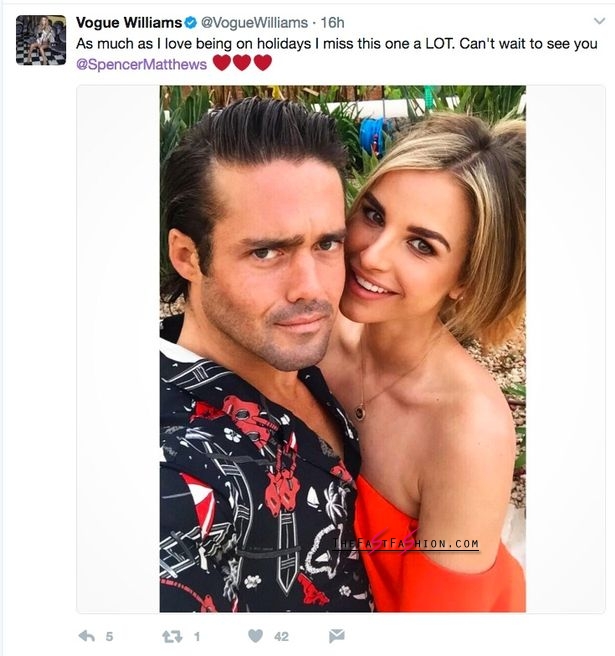 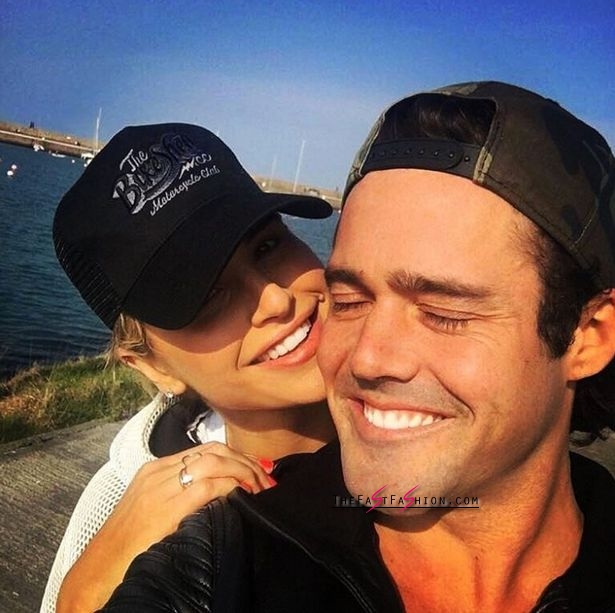 Though, to be fair to Spencer, he hasn’t tweeted since way back on May 16 or been on Instagram since May 11 and, as Vogue explained, he’s currently abroad as well.

Vogue laughed off speculation that Spencer not replying meant something sinister, telling one follower: “There’s always something! He’s in Africa. Spoke to him this morning, a non news story but always trying to get a new angle.”

The model was noticeably absent when Spencer’s brother James Matthews wed Pippa Middleton, the sister of Kate, The Duchess of Cambridge, on May 20, leading to a slew of speculation Pippa hadn’t invited her. 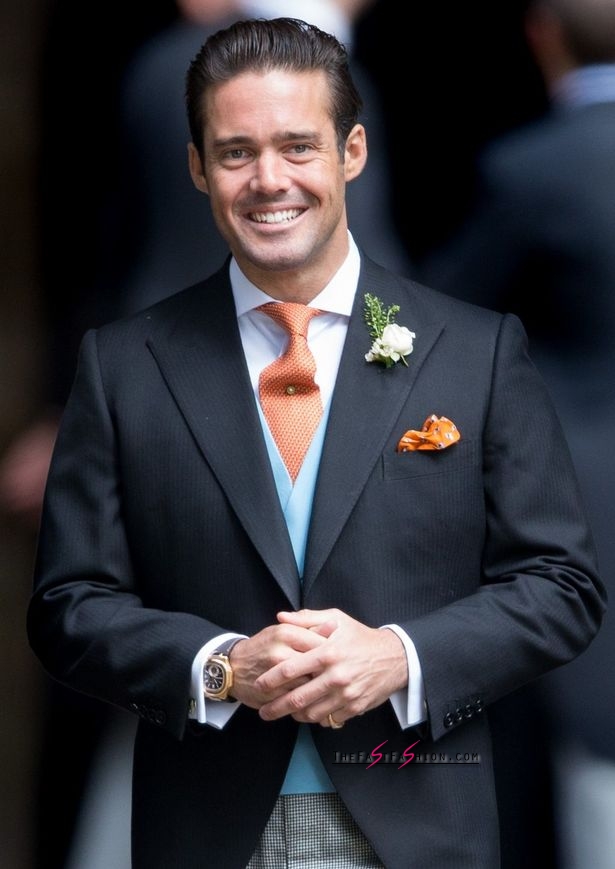 Spencer Matthews had a great time at his brother’s wedding (Photo: Rex Features) 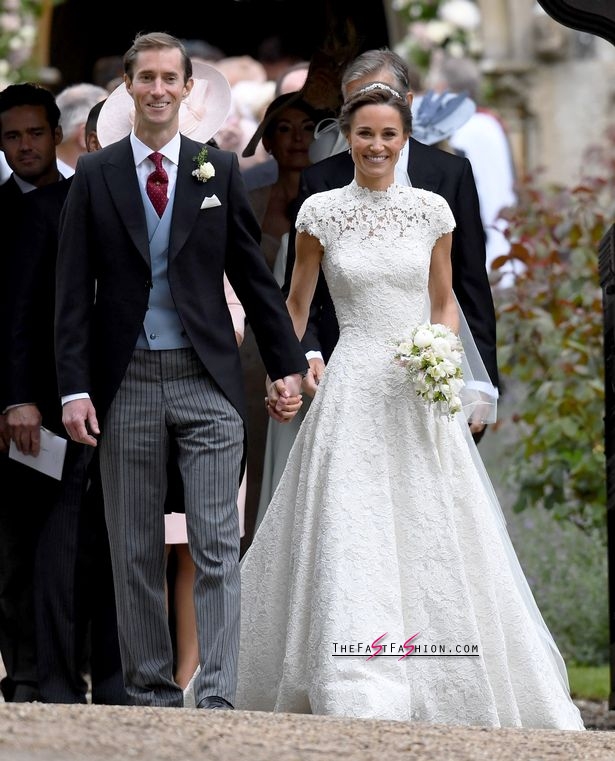 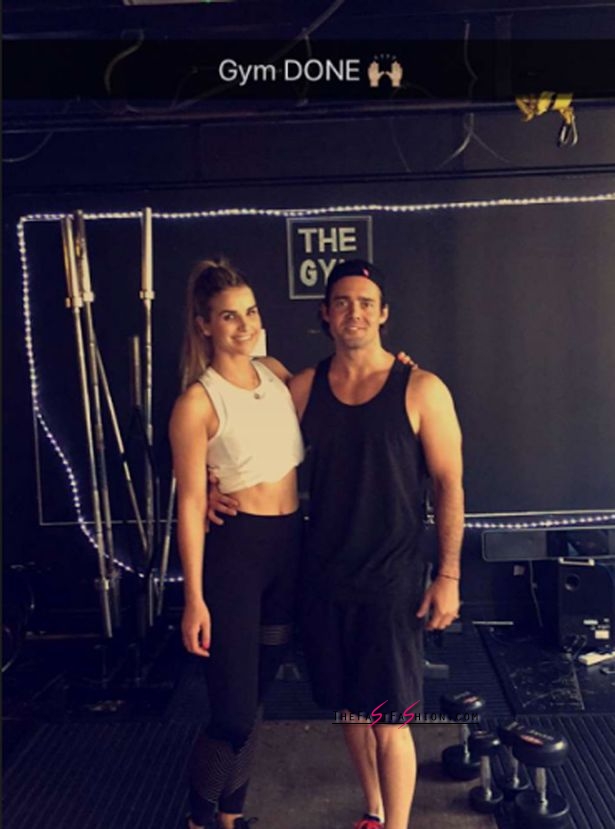 Vogue was in Dublin on the day of the wedding hosting a Q&A at a department store about fitness and health, and instead sent her best wishes to the newlyweds.

Made In Chelsea lothario Spencer and model, DJ and presenter Vogue were first linked in December after meeting while filming Channel 4 winter sports show The Jump. They confirmed their relationship in April.

They initially played coy on their romance, insisting they were friends before Vogue teased in March that there could be a “little bit of truth” to the rumours. 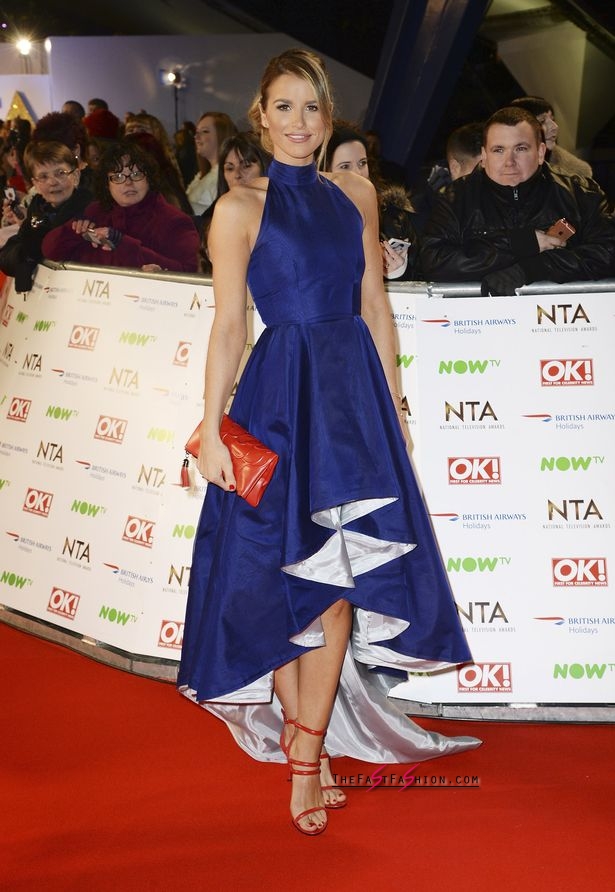 They finally confirmed the relationship in April when Spencer boldly claimed on Instagram that his “girlfriend” was hotter than Cindy Crawford, alongside a smouldering photo of Vogue.

Vogue recently denied claims it was all a showmance, telling the Daily Mail : “I’ve never understood how people could have a showmance because it’s really hard to fake something like that. I wouldn’t be able to and I wouldn’t do it to my family either. It’s telling lies.

“Obviously Spencer has a reputation and people are waiting to catch him out.”