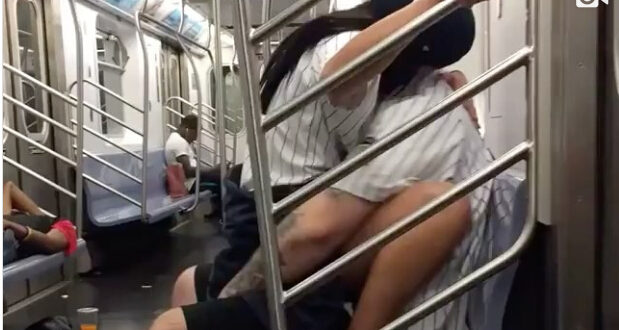 Video: Yankees fans busted rounding the bases on the subway

The Yankees didn’t get lucky Saturday — but two of their straphanger fans did.

The pair of hot-and-bothered Bombers buddies were filmed grinding away on a No. 5 train after their team’s blowout loss to the Boston Red Sox, according to video posted on Instagram by SubwayCreatures.

The couple’s clothes remained on — but that didn’t stop the woman from thrusting into the man’s crotch.

They seemed to have reached the heights of passion just as the train pulled into Grand Central Terminal. The automated subway message could be heard telling riders they could transfer to a No. 4, 6 or 7 train.

“Making up for a huge Yankee loss,” SubwayCreatures nonchalantly observed.