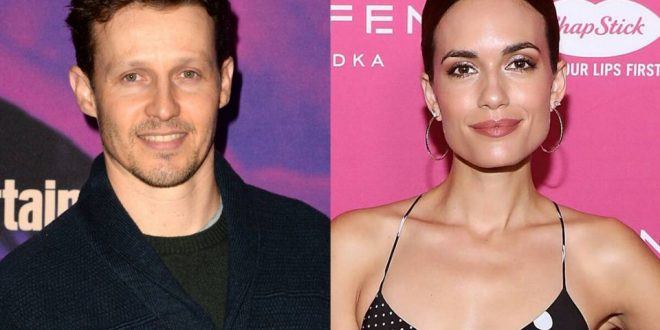 Love is in the air!

Chicago Med‘s Torrey DeVitto has found her special someone, and it’s none other than Blue Bloods star Will Estes. On Tuesday, Oct. 6, the actress made her romance with Will Instagram official.

“2020 Accessory…,” the One Tree Hill alum cheekily began her caption, alongside a black-and-white photo with the 41-year-old actor. “Mask on ear so as not to forget it when leaving the house.”

Will also debuted his relationship on Instagram. In fact, he put his love on display hours before Torrey did. However, his post was a lot more mysterious considering both he and the 36-year-old star covered their faces with black masks.

“Beautiful skies,” the Blue Bloods star wrote on his account, along with a selfie.

Naturally, the pair’s fans and followers couldn’t help but gush over their relationship news. Many shared their excitement in Torrey’s comment section.

“You are both are such a perfect match together,” one user commented. Another added, “LOVE you two together.”

Someone else replied, “Looks like it is official. So happy for you….you deserve it!!” Another responded, “after long time , wishhhh both of u happy ever after.”

Last November, Torrey expressed the qualities and characteristics she was looking for in her future partner.

“What am I looking for? A best friend, somebody to travel with, a partner, somebody who has the same values as me,” she shared with Us Weekly. “You know? A family unit, traveling, just fun. But in the meantime, I’m having so much fun with my friends, and traveling and working.”

As the saying goes, ask and you shall receive!

The actress’ new romances comes a little over a year after she and Jesse Lee Soffer called it quits in May 2019. The NBC stars began dating in August 2018, but before hitting their one-year anniversary, their romance had fizzled out.

Previously, Torrey was married to Vampire Diaries actor Paul Wesley from 2011 to 2013. At the time of their breakup, the actor’s rep told E! News, “Paul Wesley and Torrey Devito have decided to amicably split. They will continue to remain good friends.”

Will, on the other hand, has been extremely private about his personal life. He was previously linked to Jennifer Love Hewitt in 2004.

Previous Register to vote: voter registration deadlines coming up soon
Next Alyson Hannigan decorates her home for Halloween with props from ‘Buffy the Vampire Slayer’