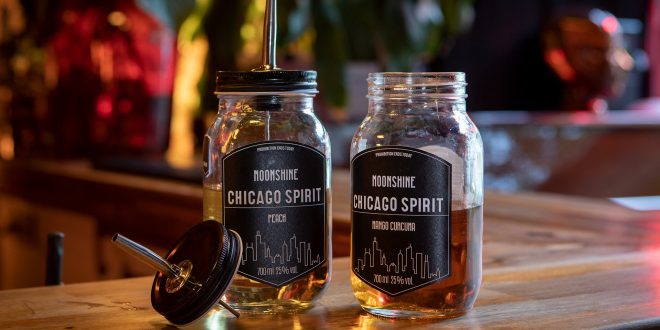 Nobody knows exactly when our Moonshine was born, because the Andersons’ family recipe has only been passed on orally for generations. However, it is clear that the recipe was first written down on the last pages of a cookbook at the end of the 19th century. But since the Andersons are still burning for experience, it wasn’t that important.

In 1920 it happened: the Volstead Act, which banned the consumption of alcohol, came into force. However, you shot yourself in the foot with the law, because contrary to its intent it led to increasing (illegal) consumption and production of alcohol. But while the gangs, which sprang up like weeds everywhere, did their business with alcohol, our moonshine shouldn’t dust up.

Our drink continued to be produced and drunk. Now, however, this had to happen under cover of the night. In those moments the moon watched over the Andersons and gave our already popular Moonshine its name. With the end of prohibition, which was to follow 13 years later, the black distillery was deprived of its right to exist. You were no longer forced to hide to enjoy alcohol and so it became quiet around the Moonshine again. But the Andersons remained loyal to him and did not allow him to be forgotten.

Almost a century later, in which much has changed, we have committed ourselves to bringing the good Moonshine of the Andersons among the people. Because it’s still the same and that’s how we love it. In our online shop at chicagospirit.de and on Amazon you can get our fruity Moonshine in the delicious varieties Wild Berry, Peach, Caramel and Mango Curcuma. Whether in winter to warm up or in summer as a sparkling cool down: our CHICAGO SPIRIT Moonshine is a unique pleasure.