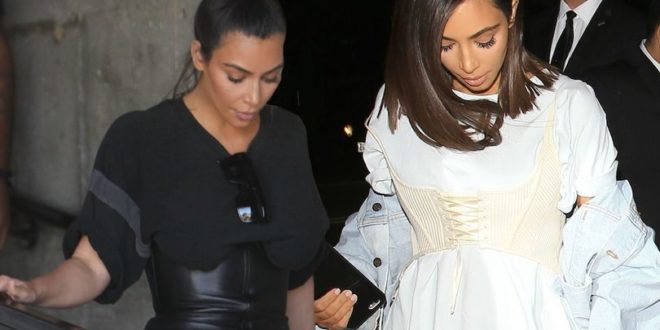 Did Kim Kardashian influence the rise of spring’s corset trend?

Cinch up ladies, the 90s corset trend is back, and the perfect

There’s no doubt about it, when Kim Kardashian is spotted wearing a trend straight off the new season catwalks, it’s probably going to take off- big time!

And unsurprisingly she’s done it again with little effort involved. It seems all she has to do to start a new style fad is to parade past the paps a few times.

But what trend has Kim K’s been making hot news this time? The corset! Yes, you heard us right, fitted basque style tops, lace detailed knits and wide waist belts are all must-have buys for the spring season ahead.

Being an hourglass shape, and not one not one to shy away from flaunting her curves on an daily basis, it’s hardly surprising Mrs West was an avid fan of this waist whittling trend, way before we had the chance to shop it on the high street at more forgiving prices.

And it may not be the most practical trend for performing her mummy duties, but nonetheless she’s certainly started something.

Other celebs have been embracing the waist trimming trend too.

Most recently we spotted actress Sienna Miller promoting her new film ‘The Lost City Of Z’ in a white basque style dress by Alexander McQueen and a sheer embroidered, boned gown by Dior.

Olivia Palermo is another lady who’s always head of the fashion curve. She was seen at Paris Fashion Week wearing her corset belt over a slouchy knit for a less clingy – and more comfortable nod to the trend.

Thanks to the catwalks and Kim K’s influence, it’s all about putting your waist in the spotlight this spring. If you’re confident enough to give Kim’s hourglass curves a run for their money, why not try a corset style top? Otherwise cinch up a t-shirt dress with a wide leather belt.

Still not convinced the corset trend is for you? Maybe you’ll prefer the lace up knits and tees available instead, which will give you that cinched effect without the love handles.