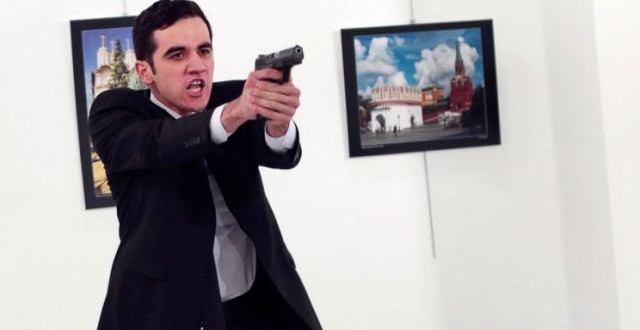 Russia’s ambassador to Turkey was shot dead today when a lone gunman fired at him at a photo exhibition in Ankara, Turkey’s capital, a Russian Foreign Ministry spokeswoman confirmed to ABC News. The attack was caught on camera.

Andrey Karlov, the ambassador, died from his wounds, she said, adding that Russia was calling the shooting a terrorist attack.

Images of the gunman, who has been identified as Mevlut Mert Altintas, show a thin man with dark hair gripping his pistol tightly with both hands.

Altintas, 22, was a member of the riot police in Ankara, which enabled him to enter the building through the use of his police I.D. card, according to Interior Ministry sources.

Burhan Ozbilici, a photographer for The Associated Press, witnessed the shooting, and wrote an account of it for the agency.

“The event was routine enough — the opening of an exhibit of photographs of Russia — and when a man on stage pulled out a gun I thought it was a theatrical flourish,” Ozbilici wrote about the incident. “It was anything but. Moments later the Russian ambassador was sprawled on the floor and the attacker was waving his gun at the rest of us, shouting slogans.”

Altintas was ultimately killed by the Turkish Anti-Terror police, the Interior Ministry said. The ambassador was already dead by the time he arrived at the hospital, they added.

Three other people were injured during the incident but are said to be recovering.

Altintas’ mother and sister were taken into custody in the city of Izmir after the shooting.

According to Russia’s state news agency, Tass, witnesses said Karlov was shot in the back by Altintas after he gave a speech at the Museum of Modern Art.

In a statement, the White House said the attack on Karlov was “heinous.”

“The United States strongly condemns the assassination of the Russian ambassador to Turkey … which reportedly also left others wounded. Our thoughts and prayers are with the families and loved ones of Ambassador Karlov and the other victims, and we offer our condolences to the Russian people and Government. This heinous attack on a member of the diplomatic corps is unacceptable, and we stand united with Russia and Turkey in our determination to confront terrorism in all of its forms,” according to the statement.

“We strongly condemn this inhuman crime, which has the aim to undermine collective efforts to reach political settlement in Syria and the process of normalization of Russian-Turkish relations,” the statement said.

Russia said it expected close cooperation from Turkey in its efforts to investigate the shooting.

“We expect the close cooperation from the Turkish authorities with representatives of the Russian investigative authorities to conduct a thorough investigation of all the circumstances of the barbaric crime, identify and punish the organizers, as well as the adoption of the most effective measures to ensure the security of Russian citizens, diplomatic missions and their personnel,” the foreign ministry’s statement said.

Karlov, 62, was a career diplomat, according to The Associated Press. He joined the diplomatic service in 1976.

Protests of Russia’s role in the Syrian war have been prominent in Turkey.

The governments of both countries have collaborated to evacuate civilians from war-torn Aleppo.

Turkish President Tayyip Receo Erdogan and his Russian counterpart, Vladimir Putin, spoke by telephone about Aleppo on Sunday and emphasized the need to swiftly overcome disruptions to the city’s evacuation, sources in Erdogan’s office told Reuters.

Turkey has suffered numerous terrorist attacks in recent years, the most prominent of which have been bombings.

Among those attacks were a suicide attack at a wedding this August and coordinated shootings and bombings of Istanbul’s major international airport in June.

Both those attacks killed scores of civilians.

ABC News’ Patrick Reevell and The Associated Press contributed to this report.