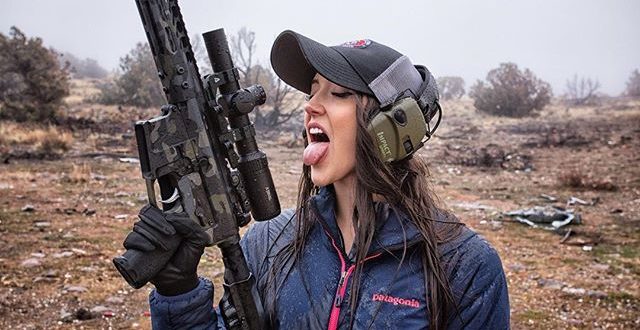 Lauren Young is a lot different than your typical Instagram model. Not that she is any less sexy than those ladies, but due to the fact that she could kill me with her bare hands. Lauren is a U.S. Army veteran, who according to Maxim, served in the 485th Military Police Company from 2011 to 2012 while deployed in Afghanistan.

She’s currently double majoring in pre-law and psychology at the University of Nevada-Reno, and when she’s not busy hitting the books, Lauren enjoys firing guns and taking absurdly hot photos. Beauty, brains, patriotism, and being tougher than a $2 dollar steak is one helluva combination.

The only gun that I’ve ever fired was of the Super Soaker variety, and even I can’t get enough of these pictures. I can’t explain it, but there’s just something about a gorgeous woman holding a firearm that’s deeply provocative. All I know is that I need Lauren to team up with those Israeli army babes in the worst way. Terrorist scumbags wouldn’t know what hit them.

Previous Girl comes up with ingenious way of editing her friend from her life after a fall-out
Next Alexandra Daddario: 10 Hottest Photos Of ‘GQ Mexico’ Cover Shoot