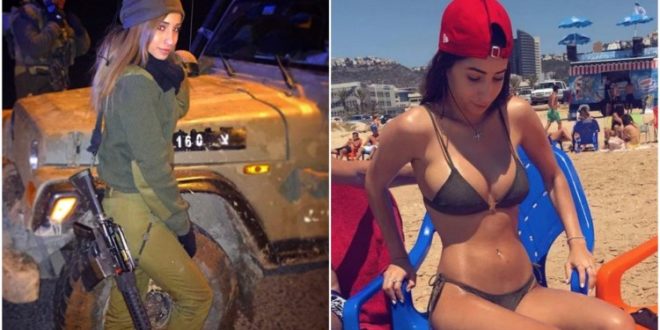 Over the years, there have been a couple of chicks who have been deemed ‘the hottest soldier in the world.’

And while they were all gorgeous, extraordinary, brave young women, none of them have come close to the levels of Kim Mellibovsky.

Mellibovsky, an Israeli citizen, is required to carry out compulsory military service. However, like anyone with a competent brain and a body that looks like that, she used took the opportunity to flaunt herself in everything from her Army gear to her bikinis.

Kim Mellibovsky has won legions of Instagram fans with her saucy snaps, which she shares alongside images of herself touting a gun in her very tight-fitting Israeli Defence Forces uniform.Kim, who is believed to be 22, also shares pictures of herself dressed up for nights out with her friends and practising her pout in her bedroom.Military service is compulsory for many Jewish Israelis. Men must serve two years and eight months while women must serve two years. Women’s roles had historically been confined to such positions as nurses or radio operators but this arrangement undergoing rapid change.

So we salute Kim for her bravery in serving her country and her kindness for sharing the rest of herself with Instagram.