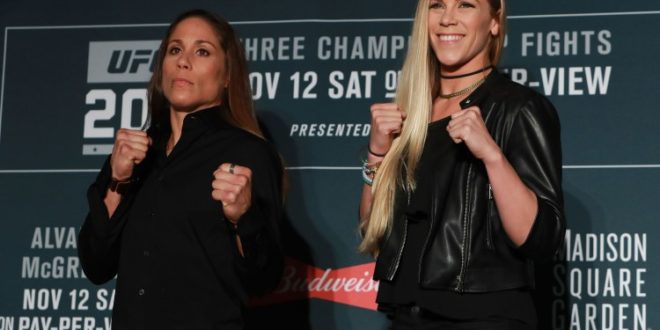 NEW YORK, NY - NOVEMBER 09: Liz Cartouche (L) and Katlyn Chookagian square up for a photo during the UFC 205 Ultimate Media Day at The Theater at Madison Square Garden on November 9, 2016 in New York City. (Photo by Michael Reaves/Getty Images)

Katlyn Chookagian is a 28-year-old UFC fighter from Quakertown, Pennsylvania. She’s competed in the flyweight and bantamweight divisions over her career, and she boasts a professional MMA record of 8-1 with two victories by knockout, one by submission, and five by decision.

Katlyn made her professional MMA debut on June 28, 2014, earning a unanimous decision win over Rebecca Heintzman at a Cage Fury Fighting Championships event. The lion’s share of Katlyn’s pro fights up to this point in her career have taken place in the CFFC, and she went 4-0 in her bouts for the promotion. Katlyn won both the CFFC women’s flyweight and bantamweight championships before making the jump to the UFC.

On July 13, 2016, Katlyn made her UFC debut at UFC Fight Night: McDonald vs. Lineker. She got off to a terrific start in her new company, beating Lauren Murphy via unanimous decision in a bantamweight bout. But unfortunately, her next UFC fight would end in disappointment, as Katlyn lost a split decision to Liz Carmouche on November 12, 2016 at UFC 205.

Up next for Katlyn is a bantamweight bout against Irene Aldana on April 8, 2017 at UFC 210. Let’s do our part in wishing Katlyn good luck by taking a look at her hottest photos in the gallery above.