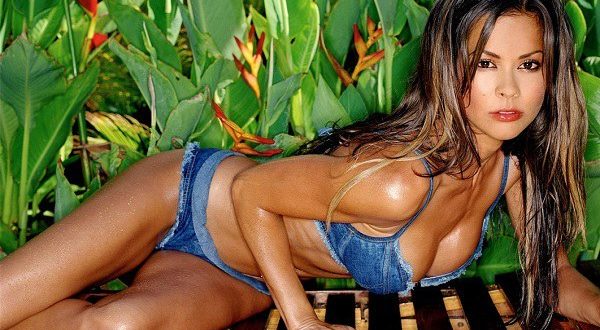 Brooke Burke has joined the 2016 cast of Celebrity Apprentice — where the television personality is going up against stars like Boy George, Jon Lovitz, Vince Neil, and Carnie Wilson. We’re mostly excited about Brooke Burke.

Brooke Burke ’s excited, too, of course, and is joining new boss Arnold Schwarzenegger in emphasizing the charitable work done on the show. That’s because NBC is worried about people still associating the show with Donald Trump. Brooke went to Instagram to proclaim: “I’m thrilled to join the 2016 cast of #CelebApprentice. I’m not afraid of challenge, I know how 2 work hard & I speak the language of business!”

Brooke Burke ’s also been speaking our language ever since she appeared regularly on the E! Networks Wild On! show. That was a long time ago, but Brooke is still the kind of bikini model who can keep working into her…well, let’s just say that she’s older than your average bikini model.

Brooke Burke should be a real challenger on Celebrity Apprentice, too. She’s already walked away with the Mirror Ball on Dancing With the Stars. Check out these hottest photos of Brooke Burke on the internet, and see why she might be distracting her competition…