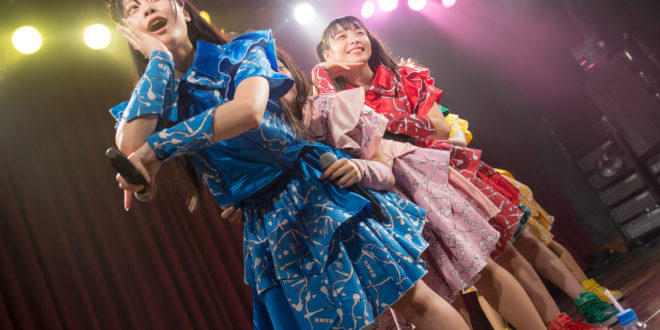 30 Beautiful Photos of Kamiyado Returns to the West For Sold Out Osaka Live!

Kamiyado celebrated another sold out performance and the 17th birthday of member Mika Ichinose (April 12) as their Kami ga Yadoru Basho〜Daremo Mita koto no nai Basho he Tobitatō!〜 Kamiyado Spring 2017 Tour stopped off in Osaka at Umeda Shangri-la on April 16, 2017!

With birthday girl Mika selecting the set list for the day, Kamiyado kicked off the festivities with a series of the group’s uptempo tunes “KMYD”, “Action!”, “Harajuku Sentai! KAMIYADO Ranger”, and “Hajimari no Kane wo Narase”. Following up with “Odore! Kamiyado Carnival”, “Bokura wa Ai wo Shinjiteru”, “Hissatsu! Chō-KAMIYADO Senpū”, and “Kamchatka Adventure”, Mika explained that she had tried to spell out Osaka by picking out characters from each of the song’s titles. While it was not immediately obvious, it was not such a surprising thing for a young woman obsessed with puns to be mildly amused by.

The second half of the live was a mixed bag of Kamiyado’s hot and cool material bouncing from the delicate “Ano ko ni Bareru yōna…” to the forceful “Genkai Toppa Philosophy” which gave way to the flirtatious “Bi・Bi・Bi♡” and breezy “Summer Dream”, and concluding with the emotional “Mirai no Uta”.