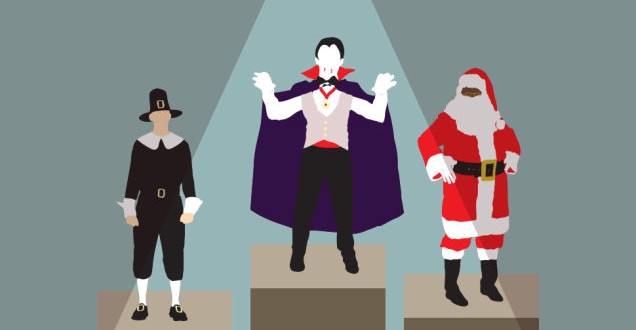 People Who Love Halloween Are the Best Kind of People

If you’re into Christmas with your reindeer sweaters and hearth fires and cider, stop reading. If you get all excited about being cold, drunk and sexy at the same time on New Year’s Eve, shiver on into the night. This is for all the people who love terrible horror movies, cheesy costumes, $.99 bags of fake cobwebs, and shitty cupcakes with crumbling Oreo tombstones jammed on top. Because I’m calling it now: Halloween, with all its tacky, kitschy goulishness, is the best holiday. And the people who love it are clearly the best people. Here’s why.

We don’t set aside a lot of legit time for pranks and mischief-making, and aside from maybe April Fool’s or having to join fraternities and sororities in college, Halloween is the only time grown adults can be silly, juvenile idiots and get away with it.

No special knowledge or skill set is needed to enjoy Halloween. You can simply opt to throw on a bad wig and splash some fake blood on a T-shirt and head into the office, or not. Your call. And if you do choose to make a costume, “shitty” DIY costumes are just as exciting as elaborate, expensive ones.

It’s a holiday that is actually super fun for kids AND adults, at the same time!

Adults tend to benefit far more from most holidays, which amount to getting some time off work to do more drinking. If there’s a kid-fun aspect to a holiday, it’s usually apart from the adult-fun part. It’s a day party at school or an Easter egg hunt on the weekend that’s more fun for kids. Then, adults have to find a babysitter to sneak off to some St. Patrick’s Day jam to drink food coloring.

One huge obvious exception is Christmas, which clearly is designed for kids to get tons of presents and experience magical wonderment. But the cost to adults — in actual money, in the shame of having to re-evaluate their entire life choices to compete in the capitalist market of gift-giving — can far outweigh that joy, which makes it, too a one-sided holiday. Viewed in this light, Halloween is a boon of family fun with tons of activities that certainly can be split up by age appropriateness, but many that don’t need to. Who doesn’t still want to bob for apples and go on a hayride? Also, kids get to dress up like this and adults get to dress up like this.

It’s a holiday that puts a premium on personal expression.

If you want to make the effort. That is always a valid reason to not do something, says me. But for people who want to make effort, are good at it, Halloween is a fucking wonderland of achievement and individualism that we barely recognize for the real artistry it engenders. SERIOUSLY LOOK AT these makeup transformations.

It raises the bar of confections.

I can’t count how many times I’ve been gushed to about the cronut or a special new pastry that hides six donuts inside a wisp of coconut flake. Meanwhile, every year, a team of underrated nobodies grind out another slew of recipes for awesome, hilarious Halloween themed cakes and cookies and donuts with gummy worms as snakes and marshmallows for teeth and fake egg eyeballs. Did I say Halloween wonderland yet? Halloween wonderland.

Let me be clear: I’m a big proponent of political correctness, which I think should be called something else, so that it gets more at it what it should be — taking the feelings of groups who aren’t you whose experiences don’t correspond to yours into account in a humane way. Inclusivity, perhaps. We all need lessons in this every single day, even the allegedly most self-aware among us.

That said, we are bumbling, dum-dum people fueled by bias and self-interest, and this tension to be good, while still being ourselves, is a very heavy plank on our personal crosses to bear in this life. Halloween has got our fucking number, though, on this point. There is a kind of pathological display of Bad Ideaism that reigns supreme on this night of nights, from inadvertently racist costumes, to sexist ones, or just gross-sexy costumes, to the spate of hardcore haunted houses that manage to be both thrilling and actually disturbing.

RELATED:  Crazy Makeup And Hair Has Never Looked So Good! See For Yourself

You will see many roundups of What Not to Wear this Halloween and other highly inappropriate ideas for costumes. Don’t be Miley Cyrus or Amanda Knox! someone will warn. And though I think it’s worth seriously thinking through how to have a good, fun, or culturally relevant costume that doesn’t make you seem like a complete asshole or have to trample over the progress of other groups you’ve probably never thought about, I also try see this aspect of Halloween as a kind of anything-goes, id-on-the-loose night where people strangely provide a very useful way to take stock of our inner bumbling idiots, to have a good laugh or head-shake, and then get to work unpacking it all again on Monday.

People who are into Halloween are not fucking around.

Sure, they will often seem like slackers the rest of the time. Metalheads. Outcasts. Losers. Normies. But all the sudden, come Halloween, they come alive with a work ethic that defies all previously demonstrated logic, with detailed, copious planning for a work costume, a three-month long schedule of all the haunted houses in the region, an extensive schematic of Haunted House designs.

Like, have you ever met these people? Like, these three working class Massachusetts families in this documentary American Scream, who spend the year and probably all of their disposable income crafting an entire Halloween ecosystem in their front yard, and are really good at it? Making plastic pipes and foam look like dead people breaking out of the ground is their Rushmore. They could be hoarders or into gardening, but no, they’re into creepy, cheesy, spooky kicks for no discernible reason. Also, it’s not really a classy, uppercrust holiday, which I love. It’s hard to make a dismemberment-themed yard look elegant.

It’s a holiday rooted in religion but that feels secular.

It may feel secular because it’s been thoroughly run through the commercialization-o-matic of capitalism, but in this one instance, it’s pretty hard to yearn for a time when Halloween was just about the simple pleasures of remembering the dead. Over-the-top, absurd, grotesque interpretations of death are kind of what it’s about, and should be about. There’s an interplay of the juvenile, the sexy, the spooky, the silly, and mischievous that makes it so very fun and alluring. And also it’s just cool to be walking along a few shops and suddenly see a crypt keeper holding a scythe in a salon window, just crowded in next to a row of expensive shampoo bottles. WTF? And also, yeah! Get into it! No religious affiliation necessary.

Halloween-inspired bands and other affiliated art are (generally) awesome.

Um, sorry, did you come up with the idea to write a punk song about how much you want — make that need — someone’s skull? Didn’t think so. 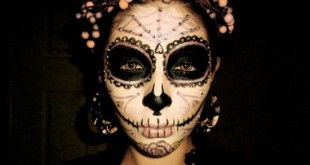 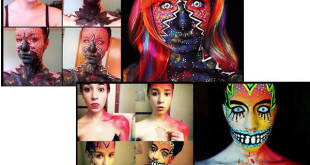