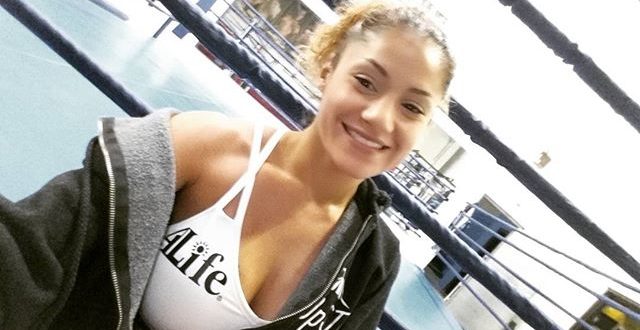 Pearl Gonzalez is a strawweight MMA fighter, and she was set to make her UFC debut at UFC 210 on April 8, 2017. Gonzalez (6-1) made weight on Friday and everything appeared to be on track for her to face Cynthia Calvillo (4-0), but then the New York State Athletic Commission dropped a bombshell out of nowhere.

[ngg_images source=”galleries” container_ids=”225″ display_type=”photocrati-nextgen_basic_thumbnails” override_thumbnail_settings=”0″ thumbnail_width=”240″ thumbnail_height=”160″ thumbnail_crop=”1″ images_per_page=”6″ number_of_columns=”0″ ajax_pagination=”0″ show_all_in_lightbox=”1″ use_imagebrowser_effect=”0″ show_slideshow_link=”1″ slideshow_link_text=”[Show slideshow]” order_by=”sortorder” order_direction=”ASC” returns=”included” maximum_entity_count=”500″]What a bunch of bullshit. If you aren’t allowed to fight in New York if you have breast implants, why the hell did they wait so long to tell Gonzalez? It seems like they could have found this out weeks ago and not wasted everybody’s time. Having both Gonzalez and Calvillo go through grueling training camps just to pull the rug out from under them at the last minute is grossly incompetent.

My heart especially goes out to Gonzalez, as this was going to be a huge moment for her career. The 30-year-old from Cicero, Illinois has won her last six bouts, with four of these victories coming by submission, one by knockout, and one by decision. Let’s hope that she’ll be given another opportunity to fight in the UFC as soon as possible.