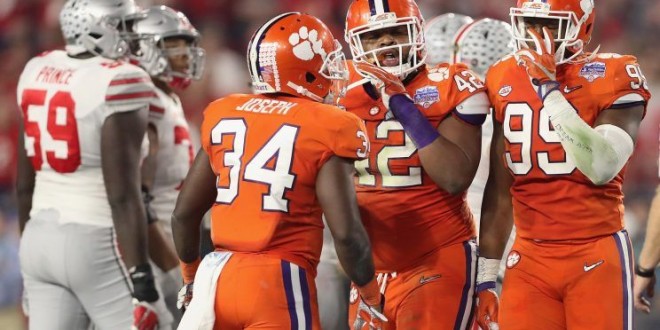 On the Clemson website, senior linebacker Ben Boulware is listed as a “pre-business” major. On the field, he seems to major in funny business.

According to media accounts, Boulware on Wednesday defended the Tigers’ proclivity for groping opponents. Defensive end Christian Wilkins caused quite a ripple during the Fiesta Bowl with his nationally televised invasive probe of Ohio State’s Curtis Samuel, which in turn led to video surfacing of Boulware becoming friendly with the backside of South Carolina’s Zack Bailey when they played in November.

If you’re bothered by video of the Tigers quite intentionally putting their hands in the private regions of opposing players, well, that means you’re a loser according to Boulware. Below is Sports Illustrated writer Brian Hamilton’s reportage, interspersed with some of my own reaction to his lengthy and at times eyebrow-raising comments.

Boulware: “That kind of stuff annoys me. The game is so serious and it’s so locked in out there, you try to do stuff just to have fun, to break up the seriousness of the game.”

My interpretation: Nothing says fun like an involuntary proctology exam from an opponent in front of 70,000 people and millions watching at home.

Boulware: “People are trying to say, ‘sexual assault’ – the people that say that have either never played football, never been in a locker room and seen the weird stuff. We’re together every day for years and years and years. You get very comfortable around each other.”

My interpretation: To the best of my knowledge, Curtis Samuel has never spent time in the locker room with Christian Wilkins, and thus has never developed whatever bond is necessary to enjoy a good ol’ groping. Whatever “weird stuff” may happen among teammates – on my high school team, there was some limited weird stuff – expanding your proclivity to opponents is different.

Boulware: “I know there’s going to be that one person, ‘I played football and I never did that.’ You either sucked at football, you had no friends in the locker room, or you were the person who went in the bathroom stall to go change because you were scared to shower with the team.”

My interpretation: There you have it. Every All-American has fondled other players during games. Heisman Trophy winners, please share your groping stories. Or, if you were a social misfit, please admit that your awkwardness kept you from grabbing the asses or genitalia of opponents – surely not some misguided sense that such behavior has no legitimate place in football. Some Ohio State players who definitely do not suck disagreed with Boulware on Wednesday on Twitter.

Boulware: “We do that stuff just to have fun out there, just to mess with the team. I know none of those players care. I know Zack Bailey didn’t care about that at all. You saw on film where he didn’t freak out. ‘Do you all practice that at Clemson?’ No, we practice beating y’all by 49 points.”

My interpretation: Apparently the Clemson-South Carolina rivalry has reached the point that owning the series extends to the rivals’ rectums.

Boulware: “That’s something I did on the side. It’s annoying, because the players don’t care. Like, you saw [Curtis] Samuel didn’t do anything at all. That’s for the media to blow that up.”

My interpretation: This is what Samuel said on Twitter about the Wilkins invasion: “If I would of felt that I would of got ejected!!” So there seems to be an indication that he cared. And it seems entirely likely that Wilkins himself could have been ejected or at least flagged if the Fiesta Bowl officials had caught him in the act.

Boulware: “Yes, Christian went – he went about four fingers deep. He went a little too far.”

My interpretation: Ya think?

Boulware: “But when I’m just messing with somebody, poking them in the belly button or grabbing someone’s butt, it’s just to break up the seriousness of the game. The people who are freaking out about that have never played the game, or were just losers who didn’t have any friends when they played the game. It’s annoying.”