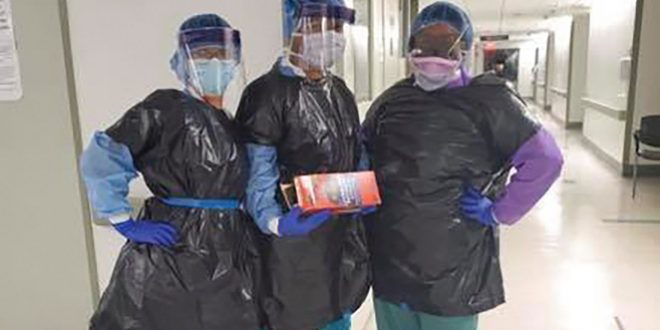 The shortage of safety gear at one Manhattan hospital is so dire that desperate nurses have resorted to wearing trash bags — and some blame the situation for the coronavirus death of a beloved colleague.

One of them is even holding the open box of 20 Hefty “Strong” 33-gallon garbage bags they used to cloak themselves.

“NO MORE GOWNS IN THE WHOLE HOSPITAL,” the caption reads.

“NO MORE MASKS AND REUSING THE DISPOSABLE ONES…NURSES FIGURING IT OUT DURING COVID-19 CRISIS.”

The caption includes such hashtags as #heftytotherescue, #riskingourlivestosaveyours and #pleasedonateppe, with the “ppe” referring to “personal protective equipment.”

Meanwhile, staffers at the hospital near Columbus Circle on Wednesday tied the lack of basic supplies there to the death of assistant nursing manager Kious Kelly, who tested positive for coronavirus about two weeks ago.

Kelly, 48, was admitted to Mount Sinai’s flagship hospital on the Upper East Side on March 17 and died Tuesday night, the workers said.

“Kious didn’t deserve this,” one nurse said. “The hospital should be held responsible. The hospital killed him.”

Another nurse described “issues with supplies for about a year now,” during which it got “to the point where we had to hide our own supplies and go to other units looking for stuff because even the supply room would have nothing most of the time.”

RELATED:  California child dies of coronavirus — believed to be first kid fatality in US

“But when we started getting COVID patients, it became critical,” the nurse said.

The nurse sources said they were using the same PPE between infected and non-infected patients and, because there were no more spare gowns in the hospital, they took to wearing trash bags to stop the spread of infection.

“We had to reuse our masks, gowns and the [face] shield,” one nurse said. “We were told, ‘You get one for the entire time until this is over.’”

A spokesman for the hospital strongly disagreed, when contacted Wednesday, that they did not have the proper equipment and were not protecting their staff.

Another nurse described Kelly as “a brother to me.”

“He was willing to help others in need, especially in this coronavirus outbreak,” the nurse said.

Kelly’s younger sister, Marya Sherron of Indianapolis, confirmed his death to The Post and said he had informed her of his illness about 10 days earlier.

“He told me he had the coronavirus,” she said. “He was in ICU but he thought he was OK. He didn’t think it was serious as it was.”

Sherron — who said she “absolutely” believed her brother was infected at the hospital — said he had “severe asthma” but was otherwise healthy.

Kelly had trouble talking due to the disease, so the siblings communicated by text until his condition worsened and he stopped responding about a week ago, she said.

“I tried to get him several times but I was told by the doctors that he was on a ventilator,” she said.

Sherron said she was told on Monday that he might not pull through, and that he died about 11 p.m. Tuesday.

Sherron also said she wanted the city to know “what an amazing person my brother was” and to “hold the powers that be accountable.”

“Our nurses and medical staff need protection and no one is fighting for their safety,” she said.

In a prepared statement, Mount Sinai said of Kelly’s death, “We are deeply saddened by the passing of a beloved member of our nursing staff.”

“This growing crisis has already devastated hundreds of families and turned our frontline professionals into true American heroes,” the hospital network said.

“Today, we lost another hero — a compassionate colleague, friend and selfless caregiver.”

In January, Kelly was featured by Mount Sinai on its website, which quoted a letter in which he was hailed as an “angel” by Joseph Fuoco, whose late mom, Camile Fuoco, underwent almost four years of breast cancer treatments before her death at Mount Sinai West last summer.

“Assistant Nurse Manager Kious Jordan Kelly, RN, showed my mom and us empathy and compassion that helped us get through the weekend and what was to come,” Joseph wrote.

“He went above and beyond and is an asset to the hospital.”