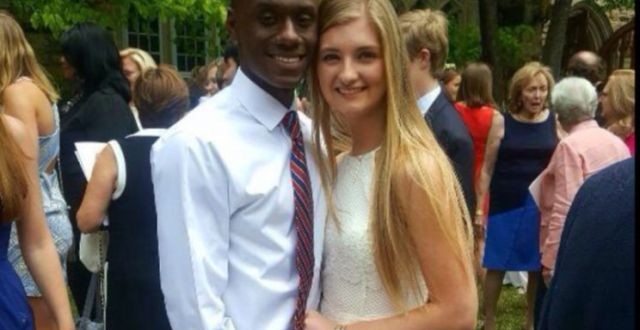 A white high school senior who says her parents cut her off financially after she continued, despite them forbidding it, to date her African-American boyfriend, has raised more than $15,000 in a day through her GoFundMe page.

“About a year ago, I told my parents that I’d started dating a boy named Michael, pictured with me above,” writes Allie Dowdle, 18, of Eads, Tenn. “Hoping to share him with my family, I showed my parents his picture, and the conversation was over before it even began. My dad did not give me an option: he told me that I was not allowed to see Michael ever again. Why? Strictly because of skin color. It wasn’t a quiet ‘no,’ either. I’ll never forget the yelling my parents did, when they expressed how disappointed they were in me, that I could do so much better. I did not know what to do. I couldn’t comprehend how someone could be seen as less because of pigment. I still can’t comprehend it, and I never will be able to.”

After continuing to discreetly date Michael — reportedly a college soccer player named Michael Swift — the couple again approached Dowdle’s parents, she says, who then decided to cut her off.

“As I am 18, my parents have chosen to no longer support my future, stripping me of all my resources including my personal savings, my car, my phone, and my education and leaving me on my own to pay for college,” writes the teen, who shares that she has maintained a 4.0 GPA since ninth grade at her private school and completed a two-month surgery fellowship at a local hospital. “Unfortunately, I will no longer be able to attend college if I cannot come up with the money somehow.” She adds that she’s received some scholarship money, and cannot find a job because she does not have “consistent transportation available.”

Allie did not immediately respond to a request for an interview. Yahoo Beauty also was unable to reach her father, Bill Dowdle, the owner of a sporting goods store, who told the Daily News “it was never about race,” that he is not a racist, and that his daughter’s race-based story is “a justification and gave her the moral high ground.” He explained that he decided to cut off his daughter’s college money because “it became obvious that she needed to go out in the world and grow up.”

Although Allie clearly has a lot of supporters based on the remarkable amount of money she’s been given in just one day, her cause has also attracted a number of harsh critics, who call her campaign, titled “Allie’s Tuition – Say No to Racism,” one that is “offensive,” “steeped in privilege,” and “really insulting.”

“Sending a white girl from a middle-class family to college is not fighting racism,” noted one GoFundMe commenter, Marissa Kizer. “In fact, expecting to avoid work, student loans, etc. and be treated like a hero for dating a black guy seems pretty racist to me.”

Another commenter, Susan Martin, noted, “This campaign is highly offensive. Saying no to racism has nothing to do with this situation. Dating a black man and sending a privileged white girl to college who can’t get a job because her parents took away her car is absolutely ridiculous. Take a bus. This campaign is an absolute insult to the millions of people who have been supporting themselves (and their families) for years, even before ‘they were 18,’ the millions of people struggling with student loan debt, the millions of people of color who are confronted with the behemoth that is racism everyday… Your struggle is so not real.”

We’ll update the story if we hear back from Allie. But in the meantime, what do you think? 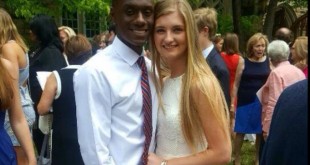