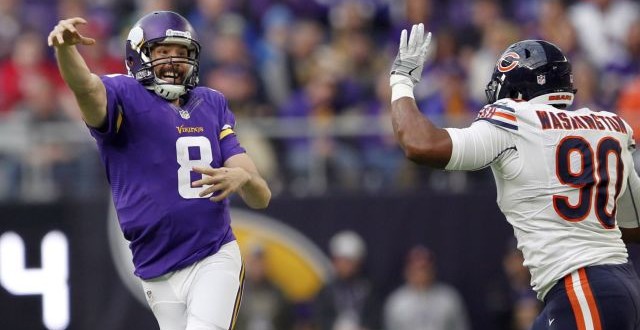 Had you told the Minnesota Vikings in August that Sam Bradford would set a major NFL passing record this season after they traded multiple draft picks for him, they might have felt relief.

The results of the trade so far have not paid off, as the Vikings are out of the playoffs despite a 5-0 start. But Bradford came out early of Sunday’s game against the Chicago Bears having passed Drew Brees for the single-season all-time pass completion mark.

It’s additionally impressive considering the injuries, especially to the offensive line and running back Adrian Peterson, they’ve suffered this season and that Bradford arrived in Minnesota eight days before the start of the season. Additionally, the Vikings got next to nothing out of first-round receiver Laquon Treadwell, and Bradford got his body bashed a lot this season. All told, his statistically achievement is impressive … even if you can insert a checkdown joke right now.

Here’s the rub: Brees will have a chance to break Bradford’s mark later Sunday. Brees is currently at 70.9 percent, so he’s in the neighborhood. But based on Brees’ typical 42-passes-per-game rate, he’d need to complete more than 80 percent of his passes in the game against the Atlanta Falcons.

But wouldn’t that be so typical of the Vikings’ season if Bradford’s record was pulled out from under him at the last minute?