Breaking News
Home / News / Video: The jilted husband allegedly battered his love rival after catching him in bed with his wife 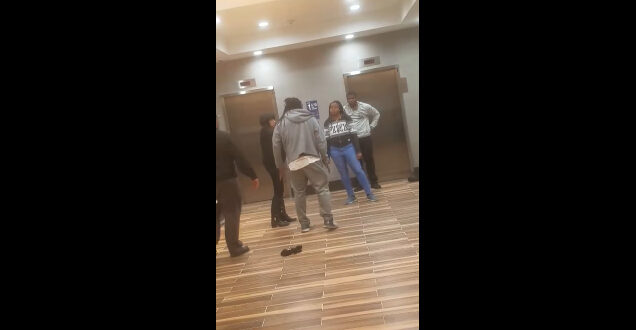 A jilted husband allegedly battered and tried to choke his best pal after catching him in a hotel tryst with his wife.

Shocked staff and guests watched as the tearful man apparently grabbed his love rival and hammered him with his fists.

The man filming the scene claimed the attacker was the woman’s husband, and he caught her meeting his pal for sex.

Shouting over to the heartbroken hubby in the footage, he warns: “Hey, yo, if you gonna go to jail she’s gonna do whatever.

“The cops are about to pull up bro.”

At one point, the victim wriggles free and grabs his mate by the scruff of the neck, screaming at him: “You’re gonna have to kill me.”

The unverified mobile footage, filmed at an unknown hotel in the US, was posted to Facebook and YouTube.

Viewers had mixed opinions about who was to blame for the incident.

Gerald Maurice wrote: “Dude is a fool, he mad at the other dude when all he is doing is being a man. He need to check his wife.”

Denise Byas said: “She probably don’t care about him no more look how crazy he act.”

And Samantha Peterson wrote: “Smh women&men fighting becuz they mate cheating when you should be checking your mate first have some respect for yourself handle it in a better way.”