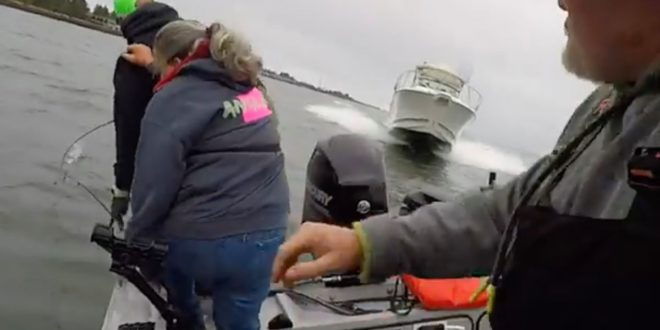 VIDEO Fishermen leap overboard before being hit by oncoming boat

A fisherman who jumped ship into bone-chilling water to dodge a speeding motorboat has filed a $372,500 lawsuit, alleging the other driver was distracted by his cellphone just before the dramatic crash caught on video.

Bryan Maess filed the suit earlier this month against Marlin Lee Larsen, 75, over the Aug. 12 crash near the mouth of the Columbia River and the Pacific Ocean, the Oregonian reports.

A GoPro camera mounted to Maess’ 20-foot fishing boat captured the chaos in the seconds before Larsen’s 31-foot motorboat crashes into the smaller, stationary vessel. A passenger on Maess’ boat frantically waves his arms and repeatedly screams “Hey!” in a desperate attempt to get the driver’s attention.

“Oh my God,” another passenger screams just before the trio leap into the chilly water.

The video — which was later posted to Facebook — shows the moment the speeding motorboat plows into Maess’ fishing vessel.

Deputies in Clatsop County and the US Coast Guard responded to the crash in the Columbia River near Tansy Point and found significant damage to the fishing boat. Maess and his two passengers, Christopher McMahon and Roni Durham, managed to jump from the fishing boat just before the crash and were later treated for non-life-threatening injuries, according to the Clatsop County Sheriff’s Office.

Drugs and alcohol did not appear to be a factor in the crash, deputies said. Larsen was cited for reckless operation, three counts of reckless endangerment and three counts of fourth-degree assault.

Larsen told investigators he couldn’t see where he was driving since he was sitting down. Larsen, who uses a motorized scooter on land, admitted that he probably should’ve been standing at the time, according to a sheriff’s report obtained by the Oregonian.

Larsen has denied using his cellphone while driving the motorboat, claiming that allegations to the contrary were “fake news,” according to the Oregonian. He has pleaded not guilty as his criminal case unfolds.

Investigators said Maess and his passengers likely dodged serious injury or death by leaping into the water. More than five months after the crash, Maess, who is a police officer, continues to suffer vision problems, headaches and injuries to his ankle, leg and arm, according to the suit.

McMahon and Durham have yet to file lawsuits against Larsen, although they’ve hired attorneys to do so. Attorney Josh Lamborn said Durham suffered psychological trauma during the crash and hasn’t been able to return to the water since August.