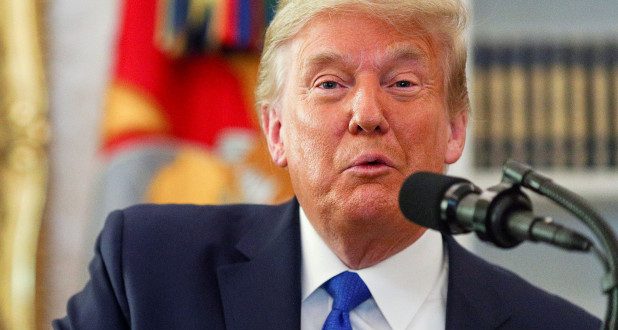 In the span of four days, President Donald Trump’s family business has lost its online store, the buzz from Trump’s promotional tweets about its luxury resorts and bragging rights as host to one of the world’s most prestigious golf tournaments.

The mob attack on Congress last week by Trump’s supporters has spurred a reckoning for the Trump Organization by businesses and institutions, at a scale far greater than his previous polarizing actions.

And the Trump brand, premised on gold-plated luxury and a super-affluent clientele, may not fully recover from the fallout of his supporters violently storming and vandalizing the U.S. Capitol, hospitality analysts say and some people close to the business acknowledge. Other companies linked with the Trumps, including Deutsche Bank, the president’s largest lender, and Signature Bank, are also seeking distance from him and his business.

The backlash is part of a broader shunning of Trump and his allies unfolding in the wake of the deadly assault on the Capitol. Schools stripped the president of honorary degrees, some prominent Republicans threatened to leave the party and the New York state Bar Association announced it had begun investigating Trump’s personal lawyer, Rudy Giuliani, which could lead to his removal from the group.

The Trump Organization had already been facing considerable financial challenges. Many of its golf and resort properties had been losing money, and the pandemic had forced it to close some restaurants and bars and drastically reduce hotel occupancy, including at its hotel a few blocks from the White House. And with more than $300 million in debt coming due in the next few years that the president has personally guaranteed, there had been some urgency for the company to line up new deals.

While such an array of challenges would spell doom for just about any hospitality brand, executives of the Trump Organization said they planned on cashing in on Trump’s global fame with overseas branding deals.

“There has never been a political figure with more support or energy behind them than my father,” Eric Trump, the president’s son, who helps run the family business, said in a statement Monday.

The family is also already considering starting a media outfit that would cater to Donald Trump’s tens of millions of supporters, an effort that gained some urgency last week when Twitter and Facebook barred the president from their platforms.

“There will be no shortage of incredible opportunities in real estate and beyond,” Eric Trump said.

Before becoming president, Donald Trump had cycled through many lines of business, including casinos, an airline and reality television. Some ventures were wildly successful, while others were colossal failures. But they revealed his ability to camouflage his wares and capitalize on opportunities, even when his name appeared irreparably tarnished.

This time, the challenges are steeper. The fallout began Thursday, when e-commerce provider Shopify said it had terminated online stores affiliated with the president.

The biggest blow came Sunday, when the PGA of America announced it would strip Trump’s New Jersey golf club of a major tournament.

Trump was said to be “gutted” by the PGA decision, according to a person close to the White House, as he had worked personally for years to push the tournament executives to hold events at his courses.

In a statement that hinted at a potential legal challenge, the Trump Organization called the decision “a breach of a binding contract,” adding that “they have no right to terminate the agreement.”

The PGA Championship, scheduled for May 2022, was the ultimate golf-world trophy for the Trump brand, which over the last two decades has assembled an international collection of golf courses and resorts that now collectively represent about a third of the company’s revenue, according to the most recent financial disclosure report.

The tournament itself is not a major source of profit, but hosting an internationally recognized event is enormously valuable for marketing. It also would have bestowed greater legitimacy on Trump and his brand, which includes 16 golf clubs around the world.

The loss associated with the cancellation is difficult to calculate, but it will be very large and last for years, said Jay Karen, chief executive of the National Golf Course Owners Association.

“You have millions of avid golfers who have a proverbial bucket list,” tied to major tournaments like the PGA Championship, he said. “If you had a major coming to you and it was pulled from you, that would certainly sting.”

In an email to members on Monday, the golf club said, “We have had a wonderful partnership with the PGA of America and share your disappointment on their decision.”

The damage is expected to continue as various companies and industries reassess their relationship with Trump and his family business.

Trump’s hotels, like the Trump National Doral near Miami, had already lost many of the major corporate conferences after he made disparaging remarks about Muslims and Mexicans, among others, during his first presidential campaign, and his comments after a deadly rally by white supremacists in Charlottesville, Virginia, in 2017 suggesting that “there is blame on both sides.”

But the fallout from the attacks last week will be steeper and longer lasting, analysts and people familiar with the company said. Some members of the president’s golf clubs are reassessing whether to keep their memberships because of possible protests and vandalism, one of the people said.

David J. Sangree, a hotel industry consultant from Ohio, said that Trump’s role in the attack on the Capitol, would further undermine the company’s efforts to appeal to affluent customers who are not Trump supporters.

“This is a big negative,” Sangree said. “There’s no question they’re going to lose more events because many groups are saying, ‘We don’t want to be associated with this brand.’”

That became even clearer Monday night when New England Patriots coach Bill Belichick said he would refuse the Presidential Medal of Freedom because of the “tragic events of last week.” The president had planned to give Belichick the award Thursday.

Even plans to launch a Trump media platform will face obstacles. If Trump seeks to forge a new conservative news network, or join an existing one like OAN or Newsmax, corporate advertisers are hardly guaranteed to support him.

“There’s only so much that My Pillow guy can subsidize,” said Jon Klein, the former president of CNN U.S., referring to Mike Lindell, the chief executive of My Pillow who is an outspoken supporter of the president. “It’s suddenly a lot more daunting a proposition than it was a week ago for OAN and Newsmax.”

Instead, Trump might find more success in generating a newsletter — embedded with a link to a streaming channel — for millions of paid subscribers, said Klein, who is chairman of TAPP Media, a subscription streaming service. “He has ignited the passions of his tribe and subscription services are all about tribalism.”

After Twitter permanently suspended the president’s account Friday, he suggested he might build his own social media platform, but doing so would likely present daunting logistical and legal challenges. And whatever he seeks to create may require significant resources and possibly loans, which could be in short supply from mainstream sources.

Deutsche Bank, which has been Trump’s primary lender for two decades, has decided not to do business with Trump or his company in the future, according to a person familiar with the bank’s thinking. Trump owes Deutsche Bank more than $300 million, which is due in the next few years.

The bank has concluded that, short of forgiving the debt, it has no way to extricate itself from the Trump relationship before the loans come due.

Another longtime financial partner of the Trumps, Signature Bank, also is cutting ties. The bank — which helped Trump finance his Florida golf course and where Ivanka Trump, the president’s daughter, was once a board member — issued a statement calling on Trump to resign as president “in the best interests of our nation and the American people.”

Susan Turkell, a spokeswoman for the bank, said Signature had decided that it “will not do business in the future with any members of Congress who voted to disregard the Electoral College.” Turkell said that in the wake of the riots the bank began closing Trump’s two personal accounts, which had about $5.3 million.

As his presidency ends, Trump is returning to a far different business than the one he ran when he took office.

Several hotel properties that carried his name have been erased from the portfolio, including ones in New York, Panama and Toronto. Plans for two new budget-friendly hotel lines, once a priority, have been indefinitely shelved. And a product branding windfall, which led Trump to endorse an array of items from steaks to mattresses, has dwindled.

The company also faces a criminal investigation from the Manhattan District Attorney’s Office, which is examining whether the president and his company committed any financial or tax crimes in recent years.

Leaving the White House, however, means that Trump will no longer face ethical restrictions like bans on international deals, potentially opening new business possibilities. The company could look for new deals in places where company executives believe Trump remains popular, such as Brazil, Argentina, Israel, Saudi Arabia and India. Trump could also hit the speaking circuit, collecting large payments for each appearance, a company executive said.

And some customers are likely to remain loyal to the existing Trump properties — particularly in red or purple states like Florida and North Carolina — no matter what the president does or says, or how many times he is impeached.

Mickael Damelincourt, the managing director at the Trump hotel in Washington, proclaimed on Twitter on Sunday that “America’s Living Room is ready for you,” as the hotel steakhouse and lobby bar aim to reopen Friday. (Tuesday morning, Damelincourt said the reopening had been delayed.)

In Miami, at Trump National Doral, the bar was busy at happy hour Friday, as was the members-only clubhouse, with customers overheard talking both about golf games and business deals, almost none of them wearing masks.

Marion McCarthy and her husband, Donald, were having drinks there — where they have been members for decades. Dozens of other guests were arriving at the resort for the U.S. Am Tour, which drew more than 100 players, according to one scorecard, which added “Doral Amateur is SOLD OUT!!!!”

“What we are seeing is an overreaction,” Donald McCarthy said. “Once he is out of office, I think he will be able to come down here and play a little more golf.” 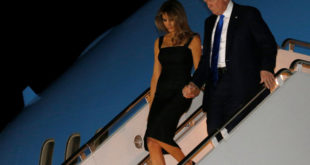 When in Rome — or in this case, Sicily. Just days after the swat heard …