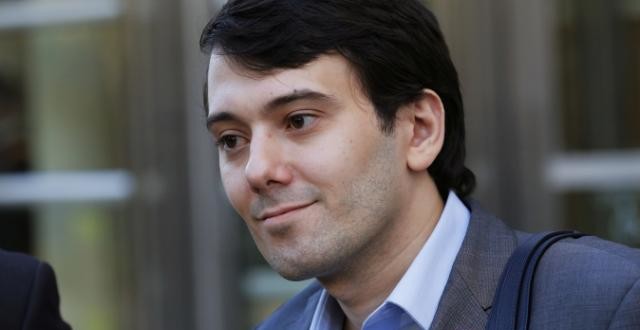 Martin Shkreli, whose name became synonymous with greed in the pharmaceutical industry, was suspended temporarily from Twitter Sunday for harassing a free lance writer.

Twitter confirmed it had suspended the account because of the harassment of Lauren Duca following the writer’s appearance on Fox News during which Tucker Carlson told her to stick to writing about thigh-high boots and not politics. The remark came in the wake of her essay, “Trump is Gaslighting America” for Teen Vogue, in which she criticized Trump for treating the CIA like “some rogue blogger” and his team’s exaggeration of the scope of his election victory.

Shkreli, a Trump supporter, apparently decided to troll Duca, first inviting her to be his date to the inauguration (“I’d rather eat my own organs,” she responded), then changing his Twitter profile to say he had a crush on her, doctoring his profile picture to a Photoshopped photo of Duca and him, and then altered his banner to a bunch of pictures of Duca and the lyrics to the 1994 single, “I Swear.” Duca tweeted screenshots of Shkreli’s machinations to Twitter CEO Jack Dorsey.

I would rather eat my own organs pic.twitter.com/IgeCRZqk8w

Before his account was suspended, Shkreli tweeted he didn’t see his actions as harassment, but rather as “unrequited love,” and then accused the New York Daily News of harassing him by seeking a comment on the suspension.

“I’ll come out there and beat the s— out of you if you f—— keep harassing me,” he told the News Sunday in a call broadcast on Periscope.

Shkreli first made headlines in 2015 when his Turing Pharmaceuticals raised the price of the HIV drug Daraprin from $13.50 a pill to $750. He faces trial in June for securities fraud and conspiracy for allegedly deceiving investors about the hedge fund he managed.

Previous People Think This Mom and Her Daughters Are Sisters, and We Can See Why
Next Ariel Winter’s cheeky bikini snap