Breaking News
Home / News / Trump rips Obama’s DNC speech on Twitter: ‘He spied on my campaign and got caught’ 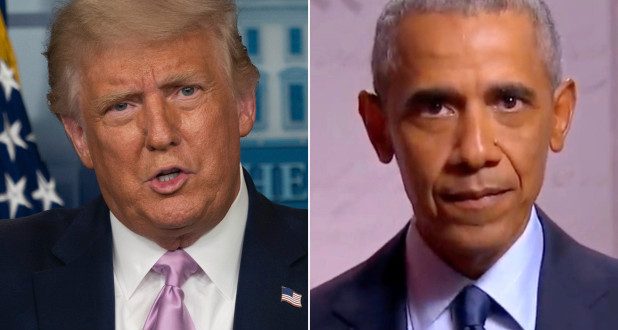 President Trump tuned in to the third night of the Democratic National Convention for Barack Obama’s anticipated address — live-tweeting his displeasure as his predecessor accused him of being unfit for the job.

“He spied on my campaign, and got caught! Trump wrote in all caps, without directly referring to Obama as the ex-president delivered a rare rebuke of his predecessor’s time in the White House.

“Why did he refuse to endorse slow Joe until it was all over, and even then was very late? Why did he try to get him not to run??” Trump followed in another tweet, barbing Obama for endorsing his veep so late in the primary process.

she encouraged Americans to vote him out of office.

The president has repeatedly accused Obama of spying on his 2016 campaign. Attorney General William Barr told Congress last year he believed “spying” did take place during a probe into Russian meddling.

Obama came out swinging against his predecessor in his convention speech, saying: “Donald Trump hasn’t grown into the job because he can’t.”

“For close to four years now, he’s shown no interest in putting in the work; no interest in finding common ground; no interest in using the awesome power of his office to help anyone but himself and his friends; no interest in treating the presidency as anything but one more reality show that he can use to get the attention he craves,” Obama said.