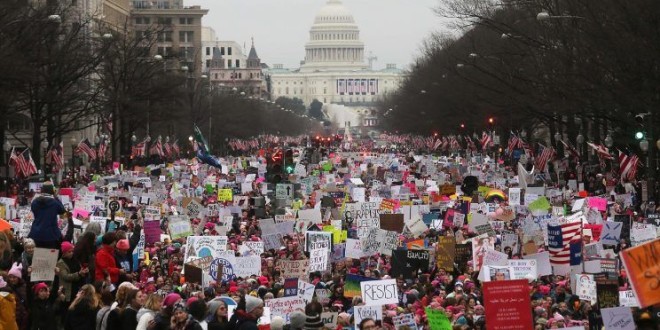 President Donald Trump questioned the more than 1 million people around the country who marched in protest of his presidency on Saturday and criticized the celebrities who joined the demonstrations.

“Watched protests yesterday but was under the impression that we just had an election!” Trump tweeted early Sunday. “Why didn’t these people vote? Celebs hurt cause badly.”

Watched protests yesterday but was under the impression that we just had an election! Why didn’t these people vote? Celebs hurt cause badly.

Millions of people around the world turned out for hundreds of simultaneous demonstrations on Saturday. More than 1 million people joined marches in the United States, including hundreds of thousands in Washington, D.C., for the Women’s March on Washington. Madonna, who performed at the rally in D.C., also delivered a profanity-laced speech.

“It took this horrific moment of darkness to wake us the f*** up,” she told the crowd. “And to our detractors that insist that this march will never add up to anything: F*** you. F*** you. … It is the beginning of much-needed change.”

Trump did not respond to Madonna’s remarks directly. Two hours after his initial tweeted response to the protests, the president issued a less divisive message.

“Peaceful protests are a hallmark of our democracy,” Trump tweeted. “Even if I don’t always agree, I recognize the rights of people to express their views.”

Peaceful protests are a hallmark of our democracy. Even if I don’t always agree, I recognize the rights of people to express their views.
— Donald J. Trump (@realDonaldTrump) January 22, 2017

In between, the former “Celebrity Apprentice” star bragged about the television ratings for his inauguration.

Wow, television ratings just out: 31 million people watched the Inauguration, 11 million more than the very good ratings from 4 years ago!

But according to Nielsen, Trump’s inauguration audience was significantly lower than the 37.7 million viewers who tuned in to watch President Obama’s 2009 inauguration.

During the 2016 campaign, Trump was obsessed with numbers: polls, TV ratings, and the crowd sizes at his rallies.

And Trump appears to have taken that obsession with him to the Oval Office.

On Saturday, White House Press Secretary Sean Spicer used his first official statement to castigate the media for what he claimed was “deliberately false reporting” on the size of the crowd at Trump’s inauguration.

Spicer was particularly incensed about photos shared on social media by members of the press comparing the crowd at Trump’s ceremony with those at inaugurations past. A number of reporters posted side-by-side photographs of the crowds amassed for the inauguration of Trump on Friday and for Obama eight years before.

“Photographs of the inaugural proceedings were intentionally framed in a way, in one particular tweet, to minimize the enormous support that had gathered on the National Mall,” Spicer said.

Despite the clear visual difference between the two inauguration crowds, Spicer declared that Trump had the largest crowd size in history.

“This was the largest audience to ever witness an inauguration, period, both in person and around the globe,” he said. “These attempts to lessen the enthusiasm of the inauguration are shameful and wrong.”

Previous 40-year-old Florida woman accused of sex with teens at her child’s party
Next If Lady Gaga’s Halftime Costumes Are as Magical as Her Super Bowl Suit, We’re in For a Treat