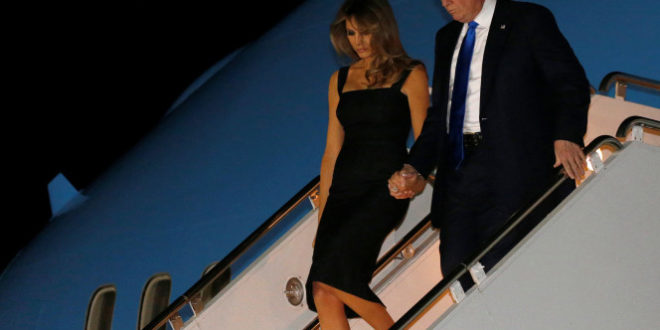 When in Rome — or in this case, Sicily.

Just days after the swat heard ’round the world, President Trump and first lady Melania Trump were finally spotted holding hands as they arrived on the Italian island Thursday night.

The pair could be seen clutching one another at around 11 p.m. local time while exiting Air Force One at the Naval Air Station Sigonella.

A pool reporter who was traveling with them even made the point to note how the couple was “holding hands as they made their way down the stairs.”

The show of affection comes amid widespread speculation that President Trump has been in the dog house — following Melania’s repeated refusals to take his hand this week.

The first lady was initially caught on camera denying the commander-in-chief as they were walking together in Tel Aviv on Monday. A second video then surfaced the next day, showing a similar gesture while the two exited Air Force One in Rome.

After entwining hands and walking down the steps on Thursday, the Trumps boarded the presidential helicopter, Marine One, for a romantic flight to the seaside resort town of Taormina, which is hosting the G7 Summit.

Sicily is slated to be the very last stop on the president’s foreign tour — his first since being elected.