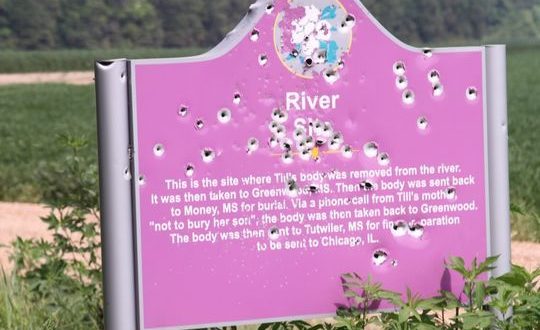 Teens Plaster Vandalized Emmett Till Marker With Words Of Hope

JACKSON, Miss. — A historical sign the recognizing black teen who was beaten and killed in Mississippi in 1955 after reportedly whistling at a white woman has been vandalized, with information about the teen removed.

Most of the text and photographs on the Emmett Till sign outside the former store where the incident reportedly happened were scraped off the sign.

“This time, it’s not someone with a shotgun or somebody trying to run over or tear down the sign,” said Davis Houck, a member of the Emmett Till Memory Project. “This time, it’s more sinister because it’s carefully thought out. It’s not a defacing, but an erasing.”

The sign was the first erected on the Mississippi Freedom Trail by state tourism officials in 2011.

Till has been dead for more than 60 years, but he has never been more alive in the American consciousness, most recently when NBA star LeBron James mentioned the courage of Till’s mother after his own home became the target of a racist attack.

Till’s killers were never convicted. The African-American teenager from Chicago, who was visiting family in Mississippi, was killed three days after he reportedly wolf-whistled at a white woman.

The teen’s body was found floating in the Tallahatchie River, a 75-pound gin fan tied to his neck. He had been brutally beaten and shot in the head.

To show the horror done to her son, his mother, Mamie Till Mobley, told the funeral home to leave the casket open.

Allan Hammons, whose company handled the installation and maintenance of the markers, said this is the first time a sign has been attacked like this.

“Was this racially motivated?” he asked. “Who knows? Vandalism has been going on since the beginning of time. Sadly, it’s the nature of the world.”

He said the sign, which cost $8,500 to erect, will be replaced for a cost of less than $500 and that authorities hope to find the perpetrators. Hammons said someone scratched the marker with a blunt tool in May. During the last week, a tour group discovered vinyl panels had been peeled off the back of the metal marker in Money, Miss.

The attack on the Till sign came as there has been renewed interest in the case.

Months later, the two men confessed to Look magazine they had indeed brutally beaten and killed Till after he reportedly wolf-whistled at Bryant’s wife, Carolyn, who now bears the last name Donham.

Donham has now admitted she lied when she testified that Till was guilty of grabbing her — a lie she repeated to the FBI a decade ago.

She admitted her lie to Tim Tyson, author of the book, The Blood of Emmett Till, saying, “Nothing that boy did could ever justify what happened to him.”

But she never gave a reason in Tyson’s book why she lied.

After the FBI reopened the case, FBI agent Dale Killinger spoke to Donham, who divorced Bryant in 1975 and later remarried.

She repeated the story about Till she had previously testified to, telling Killinger that “as soon as he touched me, I started screaming.”

Notes obtained by The (Jackson, Miss.) Clarion-Ledger reveal that Donham gave a different story when she spoke first to defense lawyers in 1955, saying Till “insulted” her, but mentioned nothing about touching her.

In 2007, a majority-black grand jury declined to indict her in connection with the killing after considering a range of charges that included aiding and abetting murder, manslaughter and accessory after the fact.

Over the last decade, civil rights markers and symbols have been repeated targets of vandalism in Mississippi.

“These are easy targets, a low-risk outlet for racism,” said Dave Tell, an associate professor at the University of Kansas who also is part of the Emmett Till Memory Project.

Some mistakenly see “civil rights monuments as a form of reverse discrimination, a threat to their own well-being,” he said.

This latest act of vandalism reveals that these attacks are not “random or harmless acts of juvenile thrill-seeking,” he said. “They are, rather, a form of political action that uses public memorials as a proxy for expressing racial attitudes.”

Last fall, vandals shot numerous holes in another Till sign, this one marking where his body was recovered in the Tallahatchie River.

After the Mississippi historical marker recognizing the Ku Klux Klan’s 1964 killings of civil rights workers James Chaney, Andrew Goodman and Michael Schwerner was unveiled in 2009, it became a repeated target, too.

In spite of such vandalism, efforts are continuing in Mississippi and across the U.S. to commemorate significant places during the civil rights movement.

When high school students from the St. Louis area on the Cultural Leadership tour spotted the vandalism Sunday, they decided to replace the missing text with their own.

Dani Gottlieb said she was expecting to witness “flowers growing in Emmett Till’s honor, not a torn-down marker.”

She and other students posted drawings and writings. “You can destroy this marker, but you cannot destroy history,” one wrote. “His death sparked a movement.”

Another penned his gratefulness to Till that his “unknowing sacrifice” helped give African Americans equal rights, writing, “We are forever grateful.”