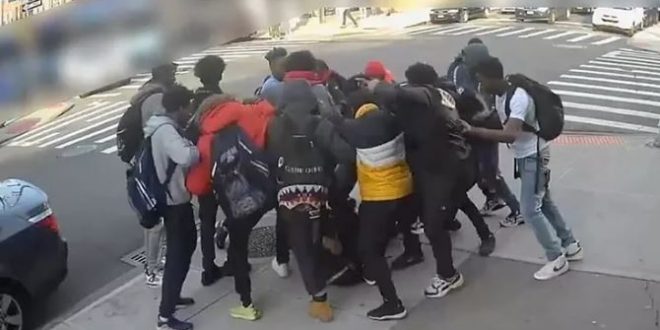 A teen accused of being involved in the videotaped March attack on a 15-year-old girl who was robbed of her Air Jordans was shot dead in Brooklyn on Tuesday, law enforcement sources said.

Tyquan Howard, 16, was shot about 1 p.m. in front of a building on St. Johns Place near Rochester Avenue and died hours later at Brookdale Hospital, police said.

It’s unclear what sparked the shooting and no arrests had been made as of early Wednesday, cops said.

Howard was arrested and charged with robbery and gang assault for being among a crew of teens caught on camera ambushing the victim on March 5 on Utica Avenue in Crown Heights, according to sources. The circumstances of his release were not clear.

RELATED:  How do people go about scoring Air Jordans at release?

The posse of punks swarmed, punched and kicked the girl in the head while she curled helplessly on the sidewalk, the stunning footage showed.

One of her attackers pulled the black and white Air Jordan 1 sneakers off her feet before the group ran off, the video shows.

Previous Stormi Webster, 2, now has catsuits that match mom Kylie Jenner’s
Next Mary-Kate Olsen and Olivier Sarkozy are divorcing after 5 years of marriage

How do people go about scoring Air Jordans at release?