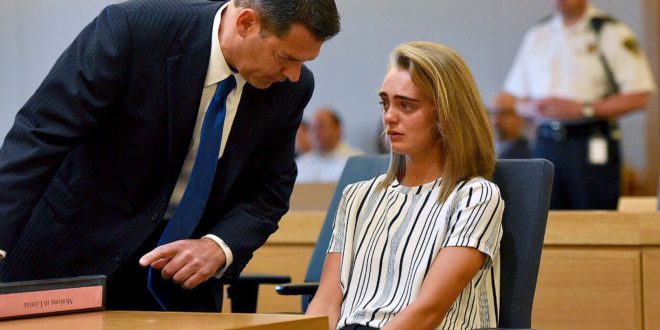 Attorney Joseph Cataldo talks to his client, Michelle Carter, before meeting at a side bar at the beginning of the court session at Taunton Juvenile Court in Taunton, Mass., on Monday, June 5, 2017. Carter is charged with manslaughter for sending her boyfriend text messages encouraging him to kill himself. (Faith Ninivaggi/The Boston Herald via AP, Pool)

The trial of the girl who allegedly urged her boyfriend to go through with committing suicide began Tuesday, with opening statements occurring in juvenile court in Taunton, Massachusetts.

Michelle Carter, 20, is charged with involuntary manslaughter for sending text messages that allegedly led to the death of Conrad Roy III.

Carter, who took the stand Monday, waived her right to a jury trial, and Judge Lawrence Moniz will decide her guilt or innocence, CBS Boston reported.

Roy’s mom, Lynn Roy, took the stand on Tuesday as the first witness in the trial. She responded to questions about her divorce from Roy’s father, hearing about Carter for the first time, Roy’s previous relationships and his struggles with sleeping and social anxiety, according to CBS Boston.

“I knew he was a little depressed but I thought he was doing great,” Lynn said. “I mean, he just graduated from high school, got his captain’s license and I thought everything was moving forward not backward.”

Roy, from Fairhaven, Massachusetts, died of carbon monoxide poisoning after he attached a water hose to his exhaust pipe in July 2014. He struggled with anxiety and depression and previously attempted suicide. He was 18.

Carter was 17 at the time of Roy’s death.

During opening statements Tuesday, prosecutors argued that Carter wanted sympathy and attention from other girls at school, yearning to be the “grieving girlfriend” who couldn’t stop her boyfriend from committing suicide, WPRI reports.

“The defendant needed something to get their attention,” Assistant District Attorney Maryclare Flynn said. “She used Conrad as a pawn in her sick game of life and death.”

Detectives discovered a series of text messages in the investigation, sent a week before Roy’s death, that were between him and Carter. 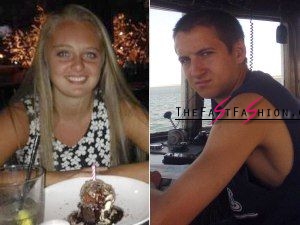 Among those were texts she sent that stated: “You always say you’re gonna do it, but you never do. I just want to make sure tonight is the real thing,” “You just have to do it” and “It’s painless and quick.”

Police also found Carter’s written admission to a friend in which she recalled a phone call with Roy after he got out of his truck and told her he was scared and didn’t want to abandon his family.

“Get back in,” Carter said she told him.

It was those text messages that the prosecution brought up in court, with Flynn saying Carter pretended she didn’t know the location or manner of Roy’s death.

“She never admitted to anyone in the Roy family that she had helped Conrad for weeks to devise a suicide plan, or that she was on the phone with Conrad and knew he committed suicide in the Kmart parking lot,” Flynn said.

Carter’s attorney Joseph Cataldo argued against those claims, saying Roy’s death was a “sad and tragic suicide,” but not a homicide, WPRI reports.

Cataldo referenced Roy’s previous suicide attempt in 2012 and presented evidence in text messages from 2012 and 2013 that showed Carter attempting to dissuade Roy from committing suicide.

Carter also suffers from her own mental illness issues, Cataldo said, and was taking medications that may have clouded her judgment, according to CBS News.