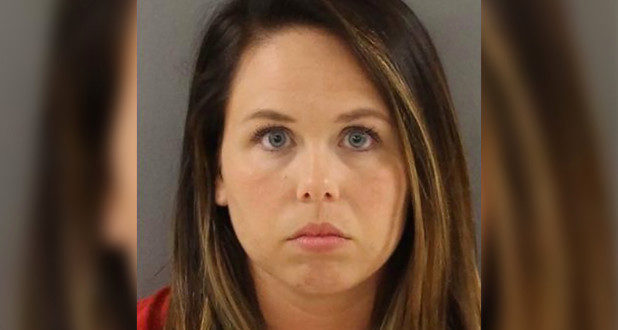 The wife of a former high school assistant football coach in Tennessee who pleaded guilty to having sex with a 16-year-old player insists she’s no rapist, claiming the illicit trysts were entirely consensual.

Kelsey McCarter, 29, pleaded guilty last year to six counts of statutory rape involving the 16-year-old sophomore player at South-Doyle High, where her husband, Justin McCarter, had worked as the school’s assistant football coach. She remains behind bars after agreeing to a three-year prison term, of which she needs to serve 30 percent before being released, according to the Knoxville News Sentinel.

But McCarter now wants a judge to toss out the teen’s lawsuit, which claims McCarter repeatedly molested him after he moved in with her and her husband — along with his older brother — with permission from their mother in July 2014 as they were having “domestic issues” with their single mother, court records show. The age of consent in Tennessee is 18.

“[The boy] claims that he suffered injury from the repeated ‘sexual abuse’ by Ms. McCarter,” her attorney, Doug Trant, wrote in a motion obtained by the newspaper. “However, the complaint is replete with factual allegations allowing the conclusion that [he] was a willing participant in numerous sexual encounters with Ms. McCarter.”

Justin McCarter later told both boys to leave the couple’s home in August 2015 and has denied in a motion to dismiss filed by attorney Julia Anna Trant that the move had anything to do his wife’s infidelity with the teen, saying he was unaware of the ongoing sexual relationship.

But Kelsey McCarter kept the unlawful liaison going well after he moved back home with his mother, and later convinced Justin McCarter to allow him to move back into the couple’s home in October 2015. The teen posted a nude photo of Kelsey McCarter on social media a few months later, according to the newspaper.

The photo led someone to alert school officials and McCarter was later indicted. Her husband, meanwhile, resigned his position as assistant football coach at the high school.

The teen later sued the McCarters, as well as the school system for failing to notify authorities. But now McCarter is asking a judge via her attorney to throw out the lawsuit. A hearing initially scheduled for Monday in the case has since been rescheduled for Dec. 20, according to the newspaper.

The teen, according to McCarter’s attorney, was not a victim of sexual abuse and therefore isn’t entitled to damages.

“By [the boy’s] own admission in the complaint, he continued to ‘submit’ to the sexual contacts with Ms. McCarter because he wanted to return to live with the McCarters,” Doug Trant wrote. “By his own admission in the complaint [the boy] desired and maintained a sexual relationship with Ms. McCarter in order to derive a personal benefit — initially to extend his stay at the McCarters’ residence and then to ensure his return therein.”

McCarter was “reasonable” in her belief that the teen wanted to be involved sexually with her and that he did so willingly, Trant’s motion continued.

Doug McCarter’s attorney, meanwhile, said her client was simply trying to help a troubled teen and ended up becoming cuckolded.

McCarter performed sexual acts on the teen at least 11 times between July and October 2015, according to the teen’s lawsuit, which seeks damages of at least $2 million, WVLT reports.

Previous The How and Why of Upgrading Your Style Game
Next Is Netflix’s Teen Prostitution Drama ‘Baby’ Obscene or Just Risqué?