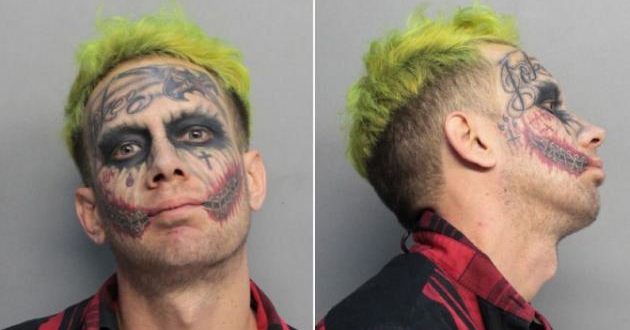 This joker is not very funny.

A Florida man with and green hair and numerous facial tattoos that make him look like the Joker from The Dark Knight was arrested by cops who said he was pointing a loaded handgun at vehicles driving past him.

A spitting image of the notorious Batman nemesis, Lawrence Patrick Sullivan appeared Wednesday at a bail hearing in Miami, where he told the judge he did not want a public defender.

“I don’t feel like signing the papers,” he said.

But a few moments later, he accepted the offer of counsel.

He was charged with carrying a concealed weapon. He did not enter a plea.

Officers responding to reports of a man brandishing a weapon at cars discovered Sullivan leaving an apartment complex, according to police.

A policeman found a Smith & Wesson handgun with six rounds in the clip, according to an arrest affidavit.

Sullivan told the officer, “I don’t have a permit because it’s too expensive,” the document said.

Sullivan, who gave his occupation as tattoo model, is being held in lieu of $5,000 bail, according to online records.

His facial markings include the word “Joker” emblazoned on his forehead.