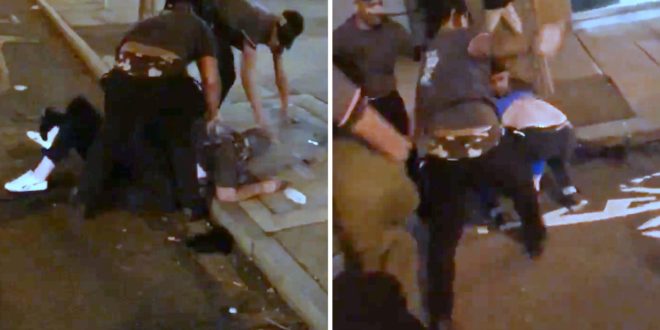 This Philadelphia couple’s “run for the border” turned into a real dash for their safety.

Brian Reese, 38, said he and his girlfriend were assaulted by employees at a Taco Bell in Center City after he complained that he had waited 45 minutes for an order of burritos, tacos and nachos.

Reese said the employees — who didn’t seem to be too busy at the time — were telling impatient customers like him and his friends that they were swamped with Grubhub orders at the Chestnut Street location that needed to be completed first. But three of the workers apparently had enough criticism from the hangry customers — prompting them to jump over the counter and follow Reese outside, where they attacked him and his girlfriend, shocking video shows.

“I backed out of the store,” Reese told WPVI. “They continued to follow me. They put me on the ground, and I don’t really remember too much else. Except for when I got up, my girlfriend was on the ground being beat, too. She wasn’t even in the store at the time.”

Reese posted footage of the late-night attack to Twitter on Tuesday after giving Taco Bell reps a week to respond to the attack. He said he was eventually offered a $20 gift card, but the fast food chain was slow to release names of the workers involved, including the six employees seen in the footage, Reese said.

Joe Boback, one of Reese’s friends who was also at the restaurant, started recording the melee as Reese dashed outside, showing one worker holding Reese in a headlock as another seemed to be punching his midsection.

That prompted Reese’s girlfriend to try to stop the attack, leading another employee to assault her, Boback told WCAU.

“It was such a blur because it was so traumatic to see my two friends get beat up for no reason,” Boback told the station. “It was complete chaos.”

Reese and his girlfriend were both hurt during the “unprovoked” attack and accused police of being slow to address the incident.

“There’s no reason my girlfriend should’ve been on the ground getting beat up as well,” he told WCAU.

A spokesperson for Taco Bell told the station in a statement that the workers involved had been fired, but it’s unclear exactly how many employees got the ax.

“We’re shocked and disappointed to see this situation; we and our franchisees do not tolerate this behavior,” the statement read. “The franchisee who owns and operates this location is retraining its staff, and all team members involved have been terminated.”

Police in Philadelphia, meanwhile, confirmed to The Post that the incident remained under investigation as of Thursday.

“We have no comment,” a police spokesperson wrote in an email.

Detectives are also investigating another recent complaint at the location involving a Grubhub driver who claims a Taco Bell employee used homophobic slurs toward him. No charges have been in filed in that alleged incident, WCAU reports.