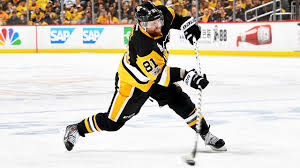 Phil Kessel is a two-time Stanley Cup champion with the Pittsburgh Penguins, and now his sister, Amanda, is an Olympic gold medalist.

“I’m very proud of her,” Phil said. “To be able to win a gold medal, it’s a special accomplishment, and I’m really proud of her.”

Amanda played a big role in Team USA’s Olympic victory. She scored in the shootout to tie the game at 2. Then, Jocelyn Lamoureux scored the game winner to claim the gold and beat Team Canada 3-2.

“I think she can’t believe it,” Phil said, “The girls worked so hard to get there for four years. That’s the biggest game they get a chance to play in. It’s a great accomplishment.”

Older brother, Phil, stayed up all night to watch his sister put on that gold medal and was on the edge of his seat the entire night.

“Obviously, I was nervous,” he said.

But he especially liked seeing his sister score in the shootout.

“It was a lot of pressure. They’re down 2-1 in the shootout and she kind of has to make it there. She made a great shot, and I’m proud of her.”

KDKA’s Rich Walsh asked Phil if he likes the shootout to determine a gold medal in the Olympics, Phil responded with a smile, “I liked it last night.”

It’s been a nice championship run for the Kessel family lately, Phil said with a grin, “Hopefully, we can keep it going.”