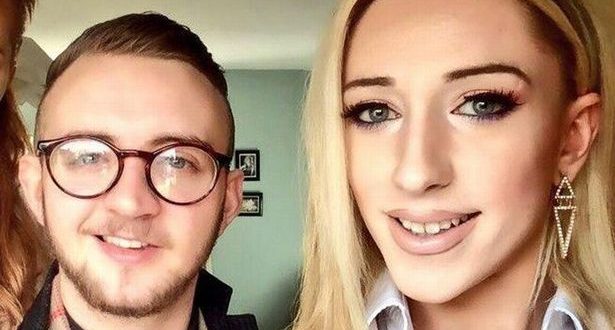 Harry is getting his eggs harvested and frozen (Photo: DublinLive)

Jamie O’Herlihy, 24, wants to become a mother after meeting Harry Matthews, a woman who is becoming a man

A sex-switch couple have revealed they hope to be Ireland’s first transgender parents.

Jamie O’Herlihy famously came out as a trans woman two years ago.

He has now met Harry Matthews, a woman from Belfast who transitioned to become a man.

The pair, both 24, have been dating for nine months and live together in Dublin city centre.

And they have frozen their eggs and sperm in a bid to fulfil their dream of having a child together.

Jamie has a half-sister Chloe, 20, who is also transgender.

The siblings, once brothers, began their transitions in 2015 and have now started medical procedures to grow breasts.

But on meeting Harry, who works in marketing and PR, Jamie put her hormone blockers on hold so she would be able to procreate.

She told how living life as a trans woman is painful as she will never be able to carry her own child.

Speaking to the Irish Mirror , she said: “Chloe started her medical transition in November but the doctor said if I started my treatment without freezing my sperm I wouldn’t be able to have children.”

“That freaked me out, I’ve always wanted kids.

“Not being able to give birth or carry a child is really painful, I’ve bawled my eyes out with my mom about this.

“I put my whole transition on hold so I could go to a fertility clinic to freeze my sperm, so that when the time comes when we want to have our child my sperm is there.

“Harry is now getting his eggs harvested and frozen.

“It’s more expensive but we’re getting there.”

“The plan is to create an embryo so we can get a surrogate to carry the egg and have our own biological child together.”

Jamie, who has not changed her male name and is out of work, told how coming out was ‘really tough’ for the siblings who said they have known since they were six they were living in the wrong bodies.

She added: “Whatever this is and for whatever reason this happened to me and Chloe, whatever sick joke someone is playing on us, that we were born into these bodies that we feel we don’t belong in.

“Once we come through this I think I’ll feel brave, to put myself out there in front of people who didn’t agree or understand who I am.”

Hairdresser Chloe opened up about how while growing up as boys they hid their true identity, describing it as a demeaning and demoralising existence.

She revealed: “We spent half our childhood hiding the fact we were really female. We’d always have our barbies with us but we’d be so conscious of who would walk past us.”

Jamie has never met her dad while Chloe’s father left when she was just 16.

Chloe added: “My mom has always been a transgender advocate but worried about our mental health when we came out.”

Developing breasts is a gruelling process which can last from six to 12 months. It involves the girls injecting a testosterone blocker into their stomachs and pumping themselves with oestrogen through a patch.

Jamie said: “My mood has altered. A lot of people would end up committing suicide and the depression can get really bad.

“In the first day of my blockers I quit my job at The George and developed severe anxiety.

“When Chloe first came out I knew where her mood swings were coming from.

“She had a hormone running through her body that didn’t suit her, she was female really and had to connect with this male hormone inside her body.

There’s a long road ahead for the pair who say transitioning is a lengthy and expensive process.

Jamie added: “Orchiectomy, the removal of the testicals, makes the transition easier so we’re looking into this now as our bodies would stop producing testosterone and it would be a quicker procedure.

“But there is so much to go through and it costs hundreds of thousands – so that when I look in the mirror there’s no resemblance of male left.”

The siblings aspire to be Ireland’s answer to Gigi Gorgeous, the Canadian model and actress noted for coming out as a transgender woman. Jamie said: “Our motto is simple – just live and let live. When we fight for human rights we fight for all humans.

“Don’t take that away from someone because you don’t know what they’re going through.”