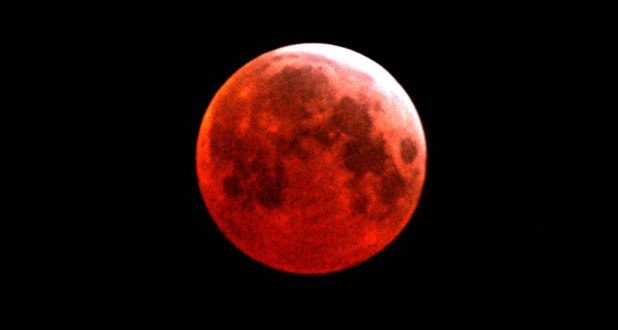 Get ready to see red.

Starting on January 20, the first and only total lunar eclipse of 2019 will be visible to everyone living in North and South America. For about an hour between late Sunday night and early Monday morning, the moon will turn bright red in a phenomenon also known as a blood moon.

And it won’t be just any lunar eclipse. During this one, the moon is closer to Earth than usual and will appear to be 14 percent bigger. Which is why scientists are calling Sunday’s phenomenon the “super blood moon” or the “super blood wolf moon.” (Yes, really.)

What is a Super Blood Wolf Moon?

It’s essentially a splashy term for Sunday’s total lunar eclipse, which occurs when the Earth passes directly between the sun and the moon, blocking most of the light except for small slivers that sneak around the Earth’s surface. The light that does get around the surface is mostly reddish-orange, and projects against the moon to give it the appearance of being that color.

(In contrast, a solar eclipse occurs when the moon gets between the sun and the Earth, making the sun look as if it has disappeared.)

The reason this particular moon is “super” has to do with its distance from the Earth. Currently, the moon is very close to its perigee, or the closest point in the moon’s orbit to Earth. At this distance, a full moon is often called a “supermoon,” making it appear slightly bigger and brighter than normal.

The “wolf” part of the phrase simply refers to the fact that the phenomenon will occur in January. Indigenous tribes in North America kept track of seasons by observing the full moons, giving them names that related to their time of year. In January, wolves “howled in hunger outside the villages,” according to the Farmer’s Almanac. Hence, January’s total lunar eclipse is now the super blood wolf moon.

When is the super blood wolf moon?

The blood moon will only emerge for an hour, at the eclipse’s totality. But the whole event will last much longer.

The show will begin at 9:36 p.m ET, when the moon enters the Earth’s penumbra, or the outer part of the shadow it creates as it blocks the sun. At that point, the lower left portion of the moon will start to dim, albeit slightly.

At 10:33 p.m. ET, the moon enters the umbra, or the bulk of Earth’s shadow. When that happens, it will look like a chunk of the moon has gone missing.

Totality will occur at 11:41 p.m. ET. This is the main event, when the moon will be fully immersed in the Earth’s shadow. During totality, the blood moon will be visible, making the moon appear to be bright red. The moon will be at the absolute middle of Earth’s umbra at 12:12 a.m. on Monday, at which the red color will be most striking.

The blood moon will last about an hour, until around 12:44 AM ET. It will then begin to brighten until 2:48, when the moon escapes Earth’s shadow and the eclipse ends.

A full calendar of Sunday night’s events is available on NASA’s website.