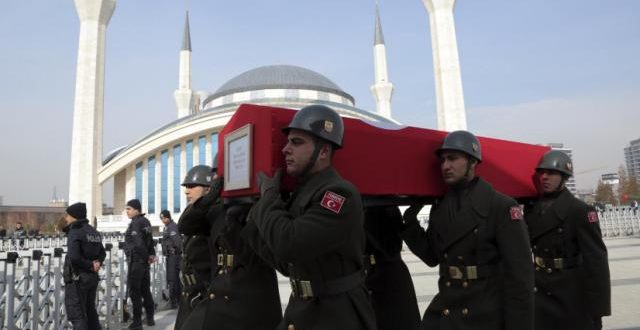 Russia immediately apologized for the bombing near the Islamic State-held town of al-Bab, which came amid warming ties between Turkey and Russia after they were strained by Turkey’s downing of a Russian jet near the border with Syria two years ago.

Meanwhile, in a further reflection of how complex the Syrian theater of war has become, Turkish-backed Syrian opposition fighters and Syrian government-allied troops briefly clashed on the outskirts of al-Bab in the first such confrontation since the Turkey-backed offensive began in northern Syria last August.

Thursday’s clashes came despite Ankara’s remarks the previous day that it was in talks with Moscow to coordinate troop movements and avoid any encounter with the Syrian military in the fighting around the town.

Al-Bab, one of the Islamic State group’s last major strongholds in Syria besides its self-declared capital of Raqqa, has emerged as the latest epicenter of the Syrian conflict, where the interests of various stakeholders converge. Turkish troops and Turkey-backed Syrian opposition fighters have been trying unsuccessfully to capture the town from IS for months.

More recently, Russian-backed Syrian government forces and their allies have converged on the town, and on Thursday made significant advances that brought them less than three kilometers (1.5 miles) from the town, according to opposition monitors.

The race for al-Bab has shaped up to be a test for the emerging cooperation between Russia and Turkey to help end the 6-year-old conflict in Syria — and the outcome could define a lot of what happens next.

The Russian airstrike came as Turkey was holding funerals for five Turkish soldiers killed in an IS attack near al-Bab the day before.

The Turkish military said Turkey and Russia were conducting a joint investigation into the bombing.

The two countries reconciled last year after ties were soured over the downing of the Russian jet in 2015. In late December, they brokered a cease-fire for Syria, and in January they sponsored peace talks in Astana, Kazakhstan, attended by Syrian rebels and officials of President Bashar Assad’s government.

The deaths from Thursday’s airstrike raise the number of Turkish troops killed in Turkey’s operation in Syria to 64.

The clashes between Turkey-backed Syrian opposition fighters and Syrian government-allied troops were reported by several activists and monitors of the conflict.

Majid Othman, a reporter for the opposition-run Thiqa news agency who is accompanying Syrian opposition fighters in al-Bab, told The Associated Press that a sniper opened fire on the Turkey-backed forces advancing on the western edge of al-Bab, sparking clashes that wounded several fighters.

The Britain-based Syrian Observatory for Human Rights said the clashes were fierce in the area, where government troops made a significant advance Thursday.

There was no immediate comment from Damascus on the reported clashes.

A Russia- and Turkey-sponsored cease-fire, in place since Dec. 30, has excluded areas where militant factions, the Islamic State group and Syria’s al-Qaida affiliate, operate or hold ground.

Syrian government troops and allied militias, as well Turkish troops, the U.S-led international coalition and Russia have been going after IS in different parts of the country.

The push has lately focused on the IS-held town of al-Bab, northeast of Aleppo. Syrian government forces and their allies have been pushing from the south, aided by Russian airstrikes

Meanwhile, Turkish troops backing Syrian opposition fighters have pushed their way from the western part of the town, entering the outskirts of al-Bab. The two advances have effectively encircled the militant group.

Elsewhere, the Syrian Arab Red Crescent and the Red Cross said a suspected rebel mortar attack that hit a Red Crescent distribution center in the government-held city of Aleppo on Wednesday killed a volunteer and two civilians.

After years of heavy fighting, Syrian government forces drove the rebels out of eastern Aleppo in December, but the opposition still holds some areas on the city’s outskirts. Fighting has continued around Aleppo and in other parts of Syria despite the Russia- and Turkey-brokered cease-fire.

Violence has also beset rebel- and opposition-held areas, including in Homs, where at least nine civilians were killed in suspected Russian or government airstrikes on Wednesday. The governor of Homs, Talal Barazi, told the AP that three people were killed when an explosive device was detonated in the city on Thursday.

Previous Where To Buy Colored Contacts For Halloween
Next Ivanka Trump: Did the President just put the final nail in the brand’s coffin?