Breaking News
Home / News / ‘Put on a mask and shut up’: China’s new ‘Wolf Warriors’ spread hoaxes and attack a world of critics 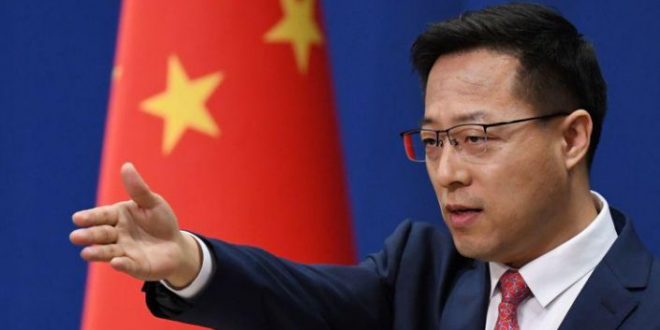 The newscast blares from a television set in a Beijing apartment, carrying through an open window and echoing across the compound. The refrain is the same every evening: praise for China’s handling of the coronavirus, dire scenes from foreign hospitals and condemnations of the United States.

The tone is often withering. Last week, U.S. Secretary of State Michael R. Pompeo was declared “the public enemy of humanity.” A few nights later, the anchor feigned sympathy for Americans, who she said were left to die while their government railed against China.

Beijing has pushed this story line at home for months — a mixture of self-congratulation for defeating the virus, denial of central government missteps, and horror at other countries’ failures to contain the pandemic.

Now, facing escalating international criticism over its handling of the outbreak and growing demands for an investigation into its origins, China has taken its strident nationalist message abroad. The strategy is provoking a backlash and colliding with President Trump’s insistence that China covered up the danger of the pathogen.

The undiplomatic invective matches the swagger of Xi Jinping’s China, which is richer and more influential than ever, and determined to shape the global narrative as it believes a superpower should — especially as the Chinese president confronts the biggest crisis of his tenure. Beijing sees itself as ascendant at a time that the United States’ stature as a world leader is ebbing.

Chinese ambassadors are attacking foreign officials on social media and peddling misinformation — amplified by the state-controlled press — to deflect blame for the virus that has killed a quarter of a million people and wrecked global economies.

The latest spat erupted last week after the Chinese ambassador to Australia appeared to threaten a consumer boycott over Australia’s calls for an independent inquiry into the outbreak. The Australian government accused Beijing, its biggest trading partner, of economic coercion; China denied it and warned Canberra to stop playing “political games.”

The editor of Global Times, a popular tabloid run by the Chinese Communist Party, weighed in on Weibo, a Chinese social media platform, comparing Australia to “gum stuck to the bottom of China’s shoe: Sometimes you have to find a rock and scrape it off.”

Rising to China’s defense is a generation of diplomats and pundits dubbed the “Wolf Warriors,” after a recent pair of blockbuster action films featuring a muscled, globe-trotting Chinese commando who vanquishes Asian drug lords, African pirates and mercenaries led by a villainous American named Big Daddy.

The diplomats’ fields of battle are social media platforms — usually Twitter and Facebook, which are banned in China. Their weapons include outrage, sarcasm, an abiding suspicion of Western governments and the press, conspiracy theories and, it seems, the support of the Chinese leadership.

“In this environment in China, there’s no punishment for people who are overzealous in defending China,” said Kerry Brown, director of the Lau China Institute at King’s College London. “You’re not going to lose your job if you overstep. Everyone is trying to demonstrate their loyalty.”

Wang Yong, professor of international studies at Peking University, called the “more assertive” style of some diplomats “a reaction to the blaming of China and China’s policies in fighting the pandemic” — especially by the United States.

U.S. news media have reported on China’s initial attempts to play down the scale of the outbreak in the central city of Wuhan, and on problems with medical equipment it has sent to other countries. The allegations have blunted Beijing’s own spin: that it has defeated the virus and is leading the medical and humanitarian response to the outbreak.

The Trump administration, under fire for its own missteps, has increasingly emphasized the pandemic’s origins. Pompeo has claimed the virus originated in a Wuhan laboratory — which scientists say is unlikely — and said over the weekend that “China has a history of infecting the world.”

“The old way is to always accept: ‘China does this, China does that,’ an agenda set by American politicians,” Wang said. “I think now Americans should have a second thought about this approach.”

A decade ago, Beijing’s diplomats kept a low profile in world capitals — dark-suited sphinxes who rarely engaged with the press or the public. In the Wolf Warrior era — with China and the U.S. locked in a bitter struggle over trade, technological primacy and geopolitical influence — their combative statements fly like arrows from embassies around the globe.

“Ridiculous and eyeball-catching nonsense,” tweeted the spokeswoman for the Chinese Embassy in India, responding to demands that China pay compensation for the spread of the virus.

“Other countries shouldn’t blame China for mistakes they have made themselves, particularly the U.S.,” tweeted the Chinese ambassador to the Netherlands.

The Chinese Embassy in Venezuela ended an angry Twitter thread — which began by complaining about Venezuelan officials referring to the “Chinese coronavirus” — by saying that some of its critics could “put on a mask and shut up.”

Offensive and gratuitous, to some. But the Global Times, in a recent article, said China’s people “are no longer satisfied with a flaccid diplomatic tone.”

The star among the Wolf Warriors is Zhao Lijian, a 47-year-old recently installed as a deputy spokesman for the Chinese Foreign Ministry. Zhao came to prominence last year when, as the No. 2 at the Chinese Embassy in Pakistan, he got into a Twitter feud with former U.S. national security advisor Susan Rice, who called him a “racist disgrace.”

In March, Zhao suggested on Twitter that the U.S. Army had smuggled the virus into Wuhan. The unfounded conspiracy theory was echoed in state media, but raised eyebrows among more moderate members of China’s diplomatic corps, including the ambassador to Washington, Cui Tiankai, who said it was “very harmful” to speculate about the virus’ origins.

“Lijian is representative of a group of younger spokespersons who are unapologetic,” Brown said. “The mindset is not about keeping a low profile. They feel they shouldn’t have to be in that position because they don’t see Americans or Europeans going around the world bowing their heads and apologizing, so why should they?”

Analysts say the pandemic has revealed China’s willingness to expand its use of disinformation campaigns — previously focused on undermining pro-democracy voices in Taiwan and Hong Kong — to the wider world. As early as 2015, scholars from the Johns Hopkins School of Advanced International Studies predicted that the People’s Liberation Army would use Twitter to deliver propaganda to new audiences “to influence the global conversation about China.”

“Beijing has been playing this game for a long time in Taiwan and Hong Kong,” said Nadege Rolland, a senior fellow at the National Bureau of Asian Research in Washington. “It has all the necessary architecture to deploy such tactics and has garnered a great deal of experience in previous disinformation campaigns.”

Wang, of Peking University, acknowledged that the Wolf Warrior style had sparked a debate within the party, although he declined to say whether such behavior would help China’s image globally.

“We are in a new context, new circumstances,” he said. “The diplomats and government officials will learn from the process, from the reaction of others, what is the best way of communication.”

Part of the strategy was laid out in a recent article on a website run by the Chinese Academy of Social Sciences. It proposed tactics that included: a 24-hour, rapid-response operation to quickly answer attacks; promoting Chinese social platforms such as Weibo and WeChat as alternatives to Twitter and Facebook; discussing China’s shortcomings where they exist; and remaining “calm and objective” while convincing people “through reason.”

So far, however, the pugnacious voices are resounding, threatening China’s ties with other nations.

In Australia, which relies on China as a market for iron ore and other exports, and is a major destination for Chinese tourists and students, the prospect of an economic boycott by Beijing drew condemnations from across the political spectrum.

“It was already dawning on many Australians that the strategic risk of overdependence on China was a problem that needed to be resolved,” said Ashley Townshend, director of foreign policy at the United States Studies Center in Australia.

“The pandemic and China’s issuance of threats will quicken those calls for our own increased resilience.”

But analysts say the menacing tone feeds patriotic sentiment in China, where the party is eager to limit the damage of an outbreak that has killed thousands and tipped the economy into decline for the first time in at least three decades.

Foreign criticism “strikes right at the heart of one of the myths that the party has been cultivating to bolster its legitimacy at home: that the [Chinese Communist Party] is efficient, competent and capable, and that it is the only one able to effectively lead the nation,” Rolland said.

Shortly after Xi was named the party’s general secretary in 2012 — on his way to becoming the country’s most powerful leader since Mao Zedong — he reportedly said in a speech that one of the reasons the Communist Party collapsed in the Soviet Union was that “nobody was man enough to stand up and resist.”

“I think that Chinese diplomats are currently trying to show that they are man enough to stand up for the CCP,” Rolland said.

Su reported from Bejing and Bengali from Singapore.