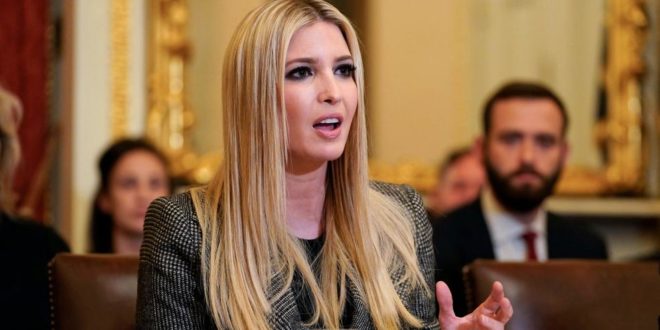 WASHINGTON—President Donald Trump dismissed concerns about his daughter, Ivanka’s, use of a private email address for government business when he spoke to reporters on Tuesday. Trump argued the situation was far different from the email scandal that enveloped his Democratic opponent, Hillary Clinton, during the 2016 presidential race.

Both Ivanka and her husband, Jared Kushner, have used personal email addresses, on a domain they shared, for government business. On Monday, the Washington Post reported that Ivanka used the private address “far more frequently than known.” That report was based on information from people familiar with a White House review of her correspondence.

RELATED:  Here are all the companies that have cut ties with the Trump family

Ivanka’s use of private email for government business drew attention because Trump made Clinton’s personal email address a centerpiece of his presidential campaign. He called it “bigger than Watergate” and pushed for an investigation.

Trump suggested Clinton should be prosecuted and encouraged his supportersas they chanted “Lock her up!” That refrain is still a common feature of Trump’s campaign rallies.

Trump was questioned about Ivanka’s emails and how they compared to Clinton’s as he left the White House on Tuesday to fly to his Mar a Lago club In Florida for the Thanksgiving holiday. He dismissed the story about Ivanka as “all fake news” that was a “whole different” thing from Clinton.

Clinton used a personal email address on a domain based on a server in her New York home throughout her time as secretary of state. She also deleted about 30,000 of her emails that she deemed personal in nature before turning others over to government officials for preservation.

“What Ivanka did, it’s all — every presidential record, everything is there. There was no deletion. There was no nothing. What it is is a false story,” Trump said.

The domain name used by Ivanka and Kushner was based on a server at Trump’s New York real estate company, the Trump Organization.  White House officials did not have access to the accounts.

“They were preserved,” Trump replied, when asked how the public could know “for sure” that all of Ivanka’s official emails were retained if she was using a private address. “The lawyer told me they were all preserved historically. They’re preserved.”

A spokesperson for Ivanka’s attorney, Abbe Lowell, told the Washington Postthat she only used the private email before officially joining the White House in early 2017 because she was unaware of rules for government emails.

“While transitioning into government, after she was given an official account but until the White House provided her the same guidance they had given others who started before she did, Ms. Trump sometimes used her personal account, almost always for logistics and scheduling concerning her family,” the spokesperson said.

Lowell conducted a review of Ivanka’s email and forwarded all the messages he deemed to be business related to officials. Lowell did not respond on the record to a request for comment from Yahoo News about how officials could have verified no relevant emails were deleted.

With Democrats in control of the House following the midterm elections, they are expected to launch a wave of investigations into the Trump administration. Ivanka’s use of private email for official business could generate interest from congressional Democrats.

As he spoke to reporters while leaving the White House on Tuesday, Trump was asked if he would let Ivanka be interviewed by Democrats about her emails.

Shortly after the president left the White House, Ivanka exited the West Wing and followed him towards the helicopter. She ignored shouted questions from reporters about her emails and proceeded onto the flight to Palm Beach.

President Trump told reporters on Friday night that he loves his daughter Tiffany, denying a report that …