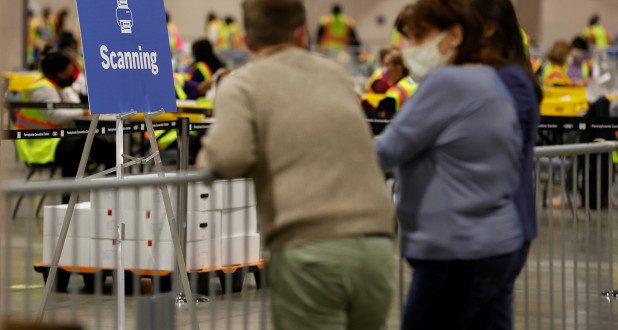 Pennsylvania’s Supreme Court on Tuesday overturned an order requiring that election observers be allowed within six feet of ballot-counting operations.

In its decision, the court said state law only requires that observers be allowed “in the room” where ballots are counted and does not mandate a minimum distance, NBC News said.

The 5-2 majority opinion also found that the Philadelphia Board of Elections “did not act contrary to the law in fashioning its regulations governing the positioning of candidate representatives,” according to the Philadelphia Inquirer.

The ruling reverses a Nov. 5 order in which Pennsylvania Commonwealth Court Judge Christine Fizzano Cannon sided with the Trump campaign and agreed to reduce the 25-foot distance from which “candidates, watchers or candidate representatives” could watch the votes being counted.

It also undercuts allegations by President Trump’s campaign that his supporters were illegally prevented from observing the tabulation process that’s projected to have helped Joe Biden capture the White House.

Those claims are included in a pending federal suit in which the Trump campaign is challenging the election results in the Keystone State, although the campaign is no longer seeking to toss out any ballots on those grounds.