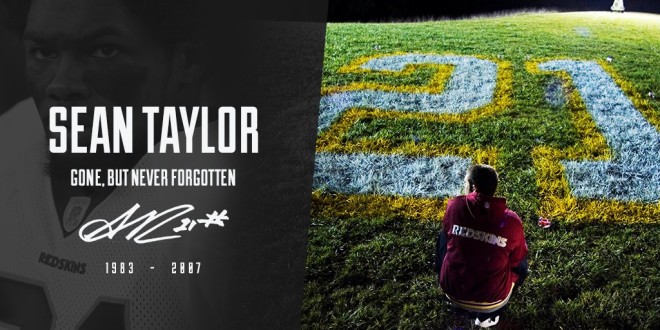 All true, all-weather Redskins are sad on this date, November 27. Nine years ago All Pro Safety Sean Taylor, aka “Da Meast” died tragically at the young age of 24. On the 9th anniversary of his death, Redskins Nation reflects on our fallen hero.

We all know his Miami home was invaded by cowardly criminals who shot him in the leg severing an artery on November 26 at 1:30 a.m. He fought for his life for 24 hours undergoing surgery, his heart stopping twice, in a coma.

He would pass in the early morning on the 27th of November.

Redskins Nation was shocked, horrified, upset, and then mourned our loss.

Thousands of Washington Redskins fans and the organization attended his funeral. Hundreds of NFL players from other teams attended also, plus many from “THE U”, his alma matter, the University of Miami.

Many of us football fans who followed college football back then knew the Hurricane as the toughest, most physical, intimidating team in the nation. Taylor was a starter on the 2001 National Championship team and voted unanimously All American. He had come along way from the poverty, crime ridden mean streets of Miami, Florida.

Six players from “THE U” were drafted in the 1st Round of the 2004 NFL Draft. Our Washington Redskins took Sean Taylor in the 1st round.

Previous Dolly Parton’s ‘Christmas of Many Colors’ saddled with cliché
Next Coco Austin Mourns the Death of Adorable Bulldog Spartacus: ‘My First Baby’