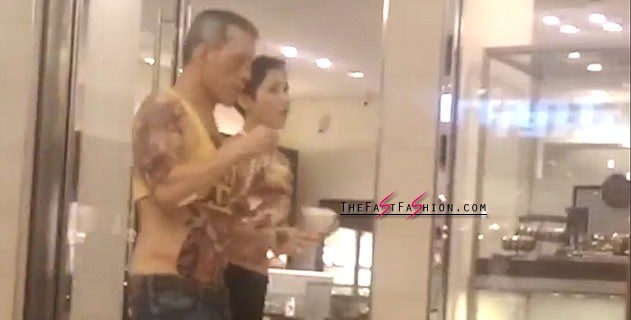 The Thai royal family has some pretty draconian laws when it comes to sharing Facebook posts.

So one person has really gone out on a limb to capture this footage.

It is believed to have been shot in July last year and now Thai authorities have said they will press charges if it is still online today.

The footage shows a large number of tattoos on his sleeves and belly, but they are thought to be transfers, as these naked pictures show.

Thailand has blocked the video, but copies still exist and people are still sharing them despite the possibility of a 15-year prison sentence.

Takorn Tantasith from the National Broadcasting and Telecommunications Commission said: ‘If even a single illicit page remains, we will immediately discuss what legal steps to take against Facebook Thailand.’

Thailand gave Facebook until 10am this morning to remove the video, but that deadline has now passed and the website is still live.

The case was the largest known lese majeste prosecution so far under Thailand’s new King Maha Vajiralongkorn, who ascended the throne after the October death of his father.

Observers have been closely watching how the law – which bars any criticism of the royal family and forces media to heavily self-censor – is applied under his reign.

The five, who have not been named, were remanded in custody Wednesday for sharing Facebook posts written by a Paris-based Thai historian Somsak Jeamteerasakul about the disappearance of a democracy plaque in Bangkok last month.

Royal insult cases are typically shrouded in secrecy as even repeating defamatory content can be grounds for prosecution.

In a recent Facebook post, 57-year-old Prawet encouraged Thais to push the boundaries of the lese majeste law, which has choked expression across the kingdom’s media, academia and arts.

Use of the law has shot up under the royalist junta that seized power in 2014.

Previous Japan’s princess Mako becomes a commoner so she can marry ‘beach tourism’ worker
Next Fidget spinners, the hit toy that spun out of nowhere