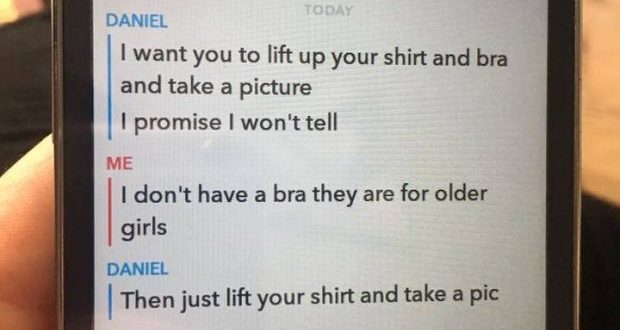 Mother shares messages from paedophile that tried to groom daughter, 10

A mother has shared pictures of Snapchat messages her daughter received from a paedophile asking her to remove her shirt and bra.

The mother, who requested not to be named, said that a man saying he was in Florida tried to groom her 10-year-old daughter and told her to take pictures of her own body. 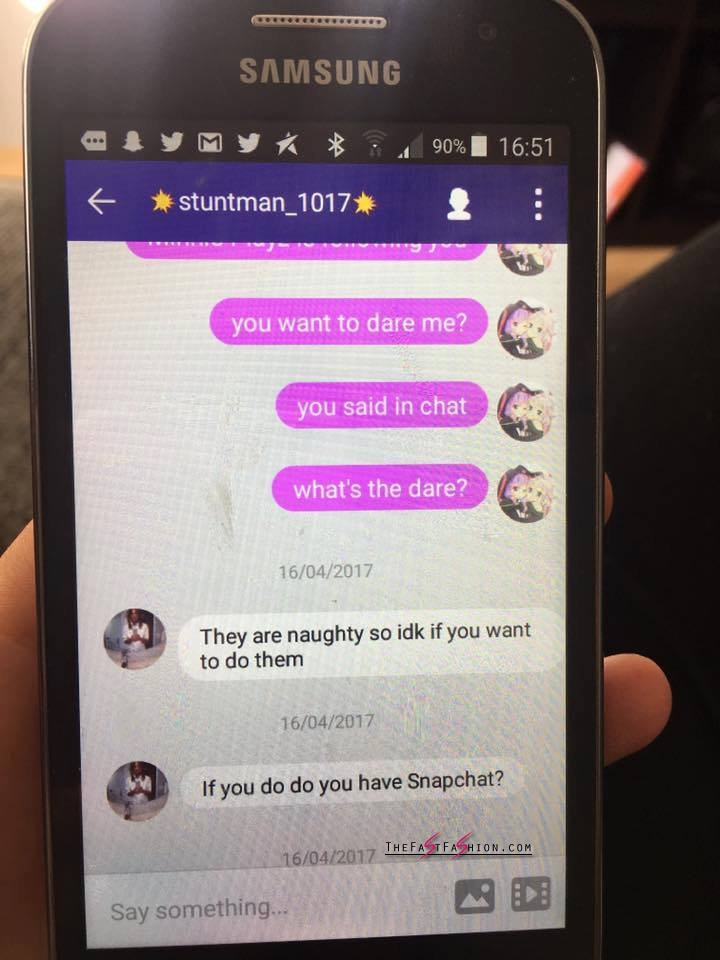 At first the girl thought he was asking for selfies, but the man replied saying: ‘I really want some other kinds of pics. Like you’ll be in it…but not just your face.’

He gave his name as Daniel Foreal, but it is not known if this is his real name and could not be independently verified.

She told him that she was just 10 and that she couldn’t do such a thing but he said ‘it will be our secret.’ 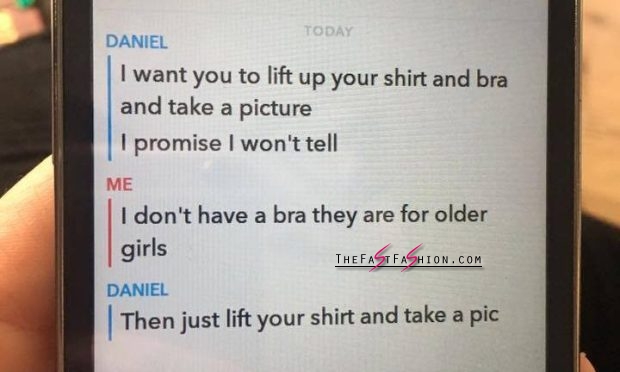 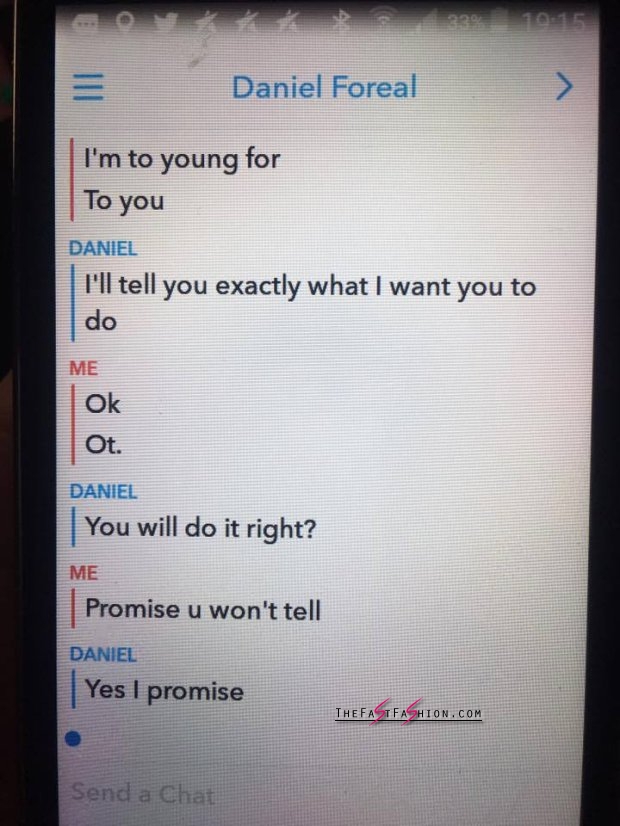 The mother found out so she posed as her daughter to message the man.

She discovered that the man had originally contacted her daughter on Live.Me, a video platform, after he approached her asking her to do a dare and saying they were ‘naughty’.

‘I was horrified and I know my daughter will not have been the only one he has targeted,’ she said.

‘My daughter is really mature for her each and she knows to tell me if someone had contacted her.

‘She has Facebook and other social media, because all her friends do and they play games together. We make s 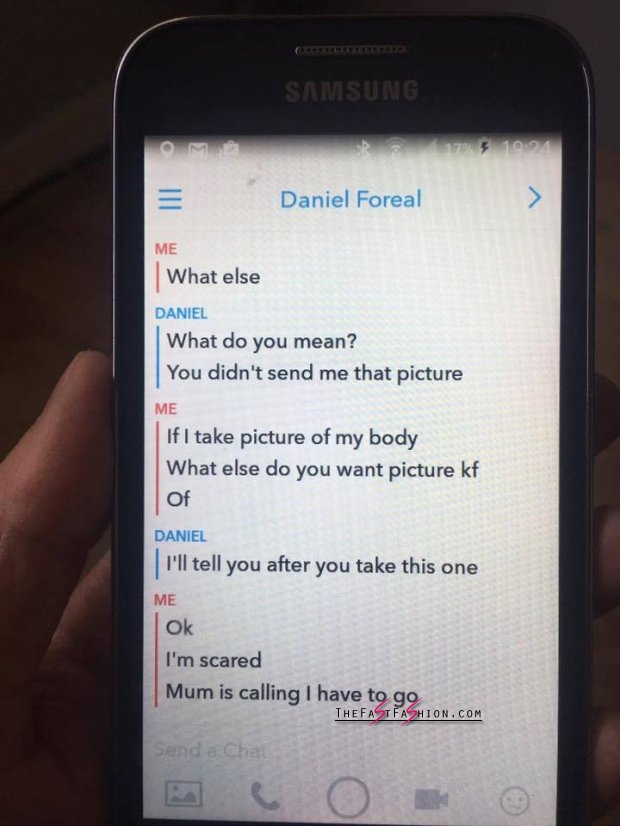 ‘When I saw her messages I felt sick. One person had sent her a picture of his penis. Another person she was talking to said he was 13-year-old and sent a picture he found off Google. He asked to see her tummy but she is too clever and did not fall for that.

‘I made this public to show what these people say to young girls and to make sure that “Daniel” does not do this to anyone else’s child. I check my daughter’s social media but a some parents might not know who there child is speaking too.’

With the mother in charge of the phone, she began to continue messaging to see what he wanted a 10-year-old girl to do.

He says: ‘It’s gana be fun. Like I’m gana tell you exactly what I want to see and then you show me (sic).’

The man then tells her ‘I want you to lift up your shirt and bra and take a picture’ before promising not to tell anyone about to reassure what he thought was a 10-year-old girl. 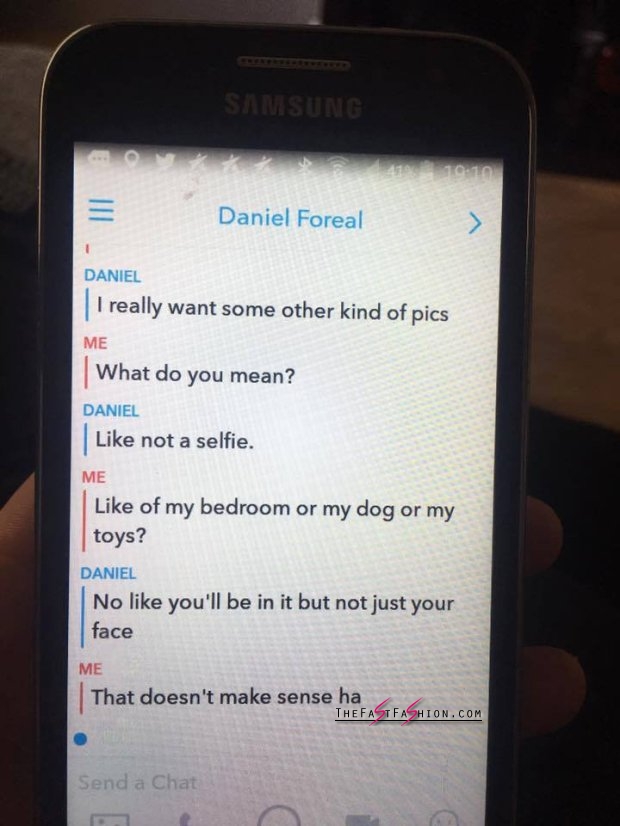 The mother replied: ‘I don’t have a bra. They’re for older girls’ and he responded by saying ‘Then just lift up your shirt and take a pic.’

She posted screenshots from the conversation as well as a social media profile of the man and a photo he sent her.

The post read: ‘So this dirty bastard thinks it is OK to message young girls asking for dirty pictures! NOT ON MY F**kIN WATCH! wrong momma to f**k with… sent a message to alllllll your friends list, the local sheriff in Florida, added to the Florida selling groups! I hope you get hung, drawn & f**kin quarted!

‘Anybody wishing to message or add on snap chat go right ahead, please share.. I know he is in Florida but horrible dirty scum bag!

‘BTW this is me messaging him pretending to be my girl.’

She says she has reported it to the man’s local sheriff in Florida and made a report to Child Exploitation & Online Protection centre. She also linked to a Facebook profile of a man called Daniel Foreal but the account now appears to have been deactivated.

No, thanks.
Previous Kim Kardashian strips down to incredibly tiny black thong to show off her ‘real bum’ – but is ‘crushed by fan backlash’
Next Rita Ora strips down to her bra in front of open window as she strikes a pose for Italian fashion brand