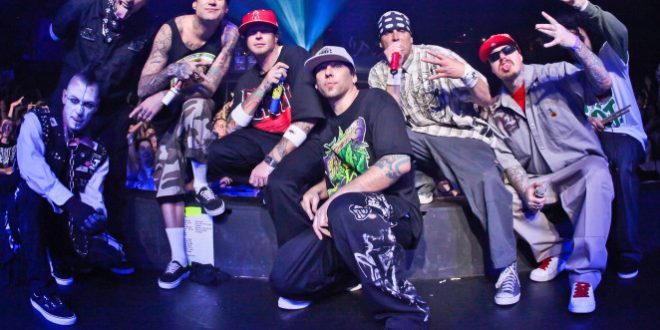 Kottonmouth Kings rapper Saint Dog, whose real name is Steven Thronson, has died. He was 44.

His management confirmed his passing on social media Wednesday, noting he died the previous day.

“Rest In Peace, Rest In Power to a true underground legend,” the statement read. “Saint Dog a k a Saint Vicious passed away yesterday in Southern California. Saint was a unique individual that had a profound impact on anyone he came in contact with. While Saint is no longer with us, his music will live on forever. Rest easy, King.”

Thronson was reportedly found dead at a friend’s house in Victorville, California, according to TMZ, citing law enforcement sources. The report said a friend found him struggling to breathe in a bedroom early Wednesday morning.

No cause of death was given, but there were no signs of foul play, TMZ reported.

Saint Dog was one of the founding members of hip-hop trio Kottonmouth Kings with D-Loc and Johnny Richter. The group’s origins are tied to Southern California in the late ’90s and they often rapped about marijuana legalization.

Thronson appeared on several releases with the group, his last being 1999’s “Hidden Stash,” before reuniting with Kottonmouth Kings’ founding members on the 2018 album “Kingdom Come.” He embarked on a solo career and his third and final solo album “Bozo” was released in 2019 with Suburban Noize Records and Force 5 Records.