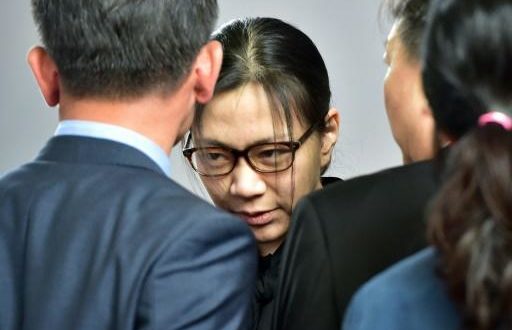 Korean Air Chairman Cho Yang-ho on Sunday apologised for the “immature” behaviour of his two daughters and said they would both immediately resign from their company posts following separate controversies.

Cho Hyun-min, the younger daughter who is marketing executive at the South Korean flag carrier, is under police investigation for assault after she was accused of throwing water into a man’s face at a business meeting.

Four years ago her older sister Cho Hyun-ah made global headlines for angrily kicking a cabin crew member off a plane after being served macadamia nuts in a bag rather than a bowl — an incident quickly dubbed “nut rage”.

“As chairman of Korean Air, as well as a father, I feel terrible about the immature actions of my daughters,” Cho said in a statement.

“Everything is my fault and my wrongdoing. I apologise to the people.”

The Korean Air chief added his two daughters will immediately step down from all positions within the company.

Seoul police said last week they were launching a formal investigation into the younger Cho, based on the testimonies of people present at the meeting.

Following the incident, the 34-year-old issued a wide-ranging email apology to “everyone” she had worked with for her behaviour, although she has denied throwing water in anyone’s face.

The 2014 “nut rage” incident saw the older Cho, then the firm’s vice president, forcing two flight attendants to kneel and beg for forgiveness on a Seoul-bound flight from New York before ejecting one of them from the plane before takeoff.

The incident was one of the most infamous cases involving offspring of one of South Korea’s mega-wealthy business elite families, whose arrogance and bad behaviour regularly make headlines.

The notorious heiress was jailed but had returned to work as an executive of Korean Air’s hotel affiliate in March.

No, thanks.
Previous Inside Edwina Bartholomew’s beautiful country wedding
Next Man gets life in prison over grisly murder, dismembering of college student