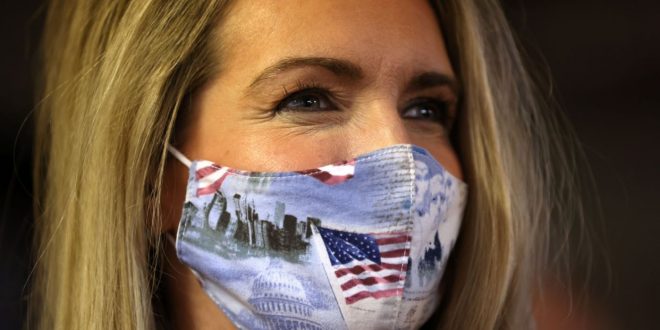 CNN asked the senator, who boasts she has sided with the president 100% of the time since being appointed to that office in December, if she agreed with Trump’s claim that he can do as he pleases to women because he’s famous.

“Sorry, what are you referring to?” Loeffler said to reporters in Buford, GA. “I’m not familiar with that.”

Trump boasted on that tape, which was recorded in 2005, that if he finds a woman attractive he just starts to kiss her, and more

Pressed further on the matter, Loeffler said she’s “not familiar with” Trump’s comments to that effect. CNN’s Manu Raju then specifically said the question referred to the “Access Hollywood” tape

“Yeah, no, uh, look,” she answered. “This president is fighting for America that’s what I’m fighting for — to make sure that every American has their chance to live the American dream.”

She then rambled about Joe Biden and socialism.

Loeffler is trailing Democrat Raphael Warnock and in a dead heat with fellow Republican Doug Collins in Tuesday’s runoff, according to Real Clear Politics polls. Unless one candidate gets more than 50% of the vote, which appears unlikely, the top two finishers on Election Day will compete in a special election in January. Loeffler was appointed to her senate seat by Georgia’s governor in December when her predecessor retired.

Previous E-cigarette maker Juul slashes valuation to $10 billion
Next Scarlett Johansson and Colin Jost are now married. Here’s a timeline of their relationship.