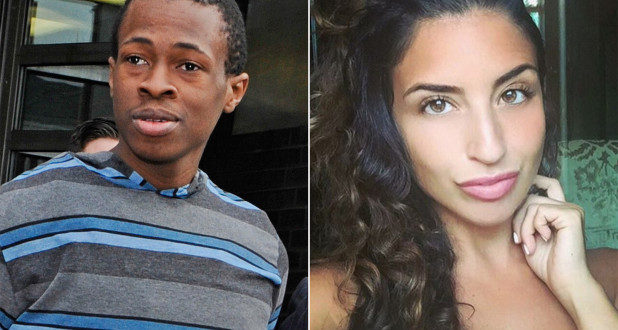 The Brooklyn man facing retrial for the sex assault and murder of Queens jogger Karina Vetrano says Rikers Island is traumatizing him.

Whining in a series of phone calls to The Post, Chanel Lewis complained about everything from supposedly contaminated food to abusive guards to self-pleasure-obsessed inmates.

“Captains are trying to tell inmates to beat me up,” he added of Corrections supervisors, although he admitted when pressed that he has not actually suffered any injuries.

Lewis complained the most about how his fellow jailbirds’ furious wanking is getting their DNA in his jailhouse chow.

He says inmates are getting it on the hands of female correction officers, who are then passing it on to him when they hand him food and water.

“Female guards hands [are a] health hazard. Food inside the hot pot is contaminated,” Lewis complained, adding that he wants to be transferred to the Brooklyn House of Detention because you can “get you own water” there.

He said he knows from experience that the Boerum Hill jail offers better conditions, although he refused to elaborate.

He left his own DNA all over the Howard Beach crime scene, with his genetic material found under Vetrano’s nails, on her back and on her phone, prosecutors have said.

Lewis admitted to cops after he was arrested that he attacked Vetrano and “finished her off.”

He has since said the confession was coerced and maintained to The Post he’s “completely innocent.”

A judge last month controversially declared a mistrial in the closely watched murder case because of a hung jury, allowing the panel to call it quits after just 13 hours of deliberation.

He faces life in prison if convicted for the murder and sexual abuse of Vetrano — but says that for now, he would just settle for better jail conditions.

Lewis said Correction officers also are instructing inmates to call him a “f—-t, the a-word and the p-word.”

City Department of Corrections spokesman Peter Thorne told The Post on Sunday, “These allegations are troubling, and claims about the safety and wellbeing of people in custody is something we take seriously. We will investigate this immediately.’’